Pace Alumnus Speaks Out About His Struggles with Depression, Anxiety 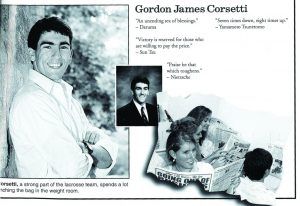 Mr. Corsetti’s lacrosse skill was noted in the yearbook his senior year, in 2006. Photo: Pacesetter

In September of last year, Pace alumnus Gordon Corsetti ’06, who was a high school and collegiate lacrosse player and is now a manager of the Men’s Officials Development Program at US Lacrosse, published an article in US Lacrosse Magazine called “Lacrosse Saved My Life: A Story of Friendship and Survival.” He described struggling with crippling depression for most of his high school career, which remained hidden from his family and friends. Lacrosse and martial arts became his only refuge.

Today, Mr. Corsetti is an advocate for suicide prevention, and he spent time at the Pace Upper School on Feb. 15 to speak about his struggle with depression and anxiety and the importance of mental health. Mr. Corsetti shared his story in an assembly Friday morning with upper school students. By senior year, Mr. Corsetti said, he had become suicidal. One day, he was badly beaten in a lacrosse practice by his friend and teammate Ben Ewing, who is now a Pace biology teacher and the freshman dean. Dejected and furious, after practice Corsetti decided that he would purposely cause a fatal car accident on his way home in order to end his life.

All that stopped him was Mr. Ewing, who noticed his frustration and came up to him and asked him how he could help. After talking to him, Mr. Ewing told him that he would take him to the school counselor the next day. The next day, as promised, he accompanied Mr. Corsetti to his first session of therapy, a visit that marked the beginning of Mr. Corsetti’s process of recovery. “Without Ben, I am not here,” he said.

“The article made waves across the lacrosse community,” said Mr. Ewing. With dialogue increasing around mental health, Mr. Corsetti’s article was groundbreaking in its honesty and its portrayal of a single well-meaning person’s power to help a friend. Mr. Corsetti’s presentation to students was as transparent and hopeful as his article. Although he didn’t sugarcoat the difficulties of his ongoing battle with depression, he also spoke about the strategies he has learned to help cope with it.

“Today, I manage my symptoms with a psychiatrist,” Mr. Corsetti wrote in US Lacrosse Magazine. “I navigate the ups and downs of my life with a therapist. I take medications that lessen the frequency of suicidal thoughts and intensity of depressive episodes. I meditate and exercise to calm my mind. I am honest with my family and friends when I spiral into dangerous thoughts.” He discussed the value of these treatments, and shared even more strategies. Among other things, he shared the importance of visualization, of deep breathing and of creating a support system of family and friends.

“I am a depressive,” Mr. Corsetti wrote in the afterword to his article. “I suffered for years until I learned how to attack my depressed thoughts and gain mastery over them. I live with depressed thoughts, but I do not act on my thoughts. I remain alive despite my brain’s best attempts to kill me. I use the intruding and malevolent thoughts to fuel my permanent recovery. It took me a long time to realize that I don’t suck at suicide. I succeed in living.”