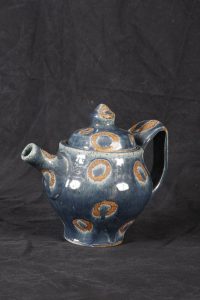 “This teapot won a Gold Key, actually,” said senior Jared Rayman. “I really just thought [ceramics] was a fun class and that the teacher was the best, but the more I worked on it, the better I got.” Photo: Jared Rayman 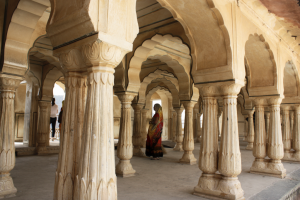 Shown above is junior Tanner Walton’s Gold Key winning photograph, “Focal Point,” taken at Amber Fort in Jaipur. “When I saw these arches, I immediately knew I wanted to take a picture, but what makes this picture special is the woman in the middle arch,” said Walton. “I love the symmetry and pattern of the picture.” Photo: Tanner Walton

This past December, students across America submitted 350,000 original works across 29 categories for one of the biggest national high school competitions, the Scholastic Art and Writing Awards. Students can receive three types of exceptional recognition: a Gold Key awarded to the very best works, a Silver Key awarded to stand-out works, and an Honorable Mention awarded to accomplished works. Recently, 10 Pace Academy students were awarded with some of these prestigious awards.

Jack Brown is the only sophomore who earned such awards. Brown will collect a Silver Key for his poetry portfolio entitled “a piece of everything” and an Honorable Mention for his poem entitled “blinded.” The other Pace student to receive a writing award was junior Ben Ginsburg, who received two Honorable Mentions for his critical essays, “Huck Finn’s Journey: A Struggle to Make Sense of Hypocrisy” and “Debt Grinding Debt: An Emersonian Take on Our Dilemma.”

Juniors India Behl and Blaise Reyes each earned six photography awards. Behl will claim a Gold Key for her piece “Stand Apart,” a Silver Key for her piece “Everything else is ‘irrelephant,’” and four Honorable Mentions. Reyes won a Gold Key for “A Morning in the Forest,” three Silver Keys for “Sitting Beggar,” “Lone Road” and “Oh No,” and two Honorable Mentions. “My favorite shot was one I took in India,” said Reyes. “It depicts a safari jeep riding through a forest early in the morning.”

In the ceramics category, senior Jared Rayman won a Gold Key for his work “Untitled”, along with an Honorable Mention for a different piece. “Winning a Gold Key really surprised me, since ceramics is something I only seriously started working on my junior year,” said Rayman. “Receiving a Gold Key was awesome and a pretty cool experience.” Other ceramics awards include Silver Keys for seniors Conor Hartman and Chase Karamanolis. Hartman won two Honorable Mentions, as well.

In the sculpture art category, junior Ryan Kann will be taking home a Silver Key for his piece “Invisible Crossroads.” The piece was so massive (250 pounds before being hollowed) that it took Kann the entire semester to build.

“The Pace Arts Alliance will pay for acrylic awards to represent the Gold Key, Silver Key and Honorable Mention,” said Upper School Visual and Performing Arts teacher Mr. Dorman. These acrylic awards, along with certificates and pins from Scholastic, will be given to the winning students during a morning assembly in late April.

Junior Ryan Kann’s sculpture, “Invisible Crossroads,” is shown in the photo at the top of the page. “Working on such a large scale allowed me to be more detailed than with an average sized piece,” said Kann. Photo: Ryan Kann