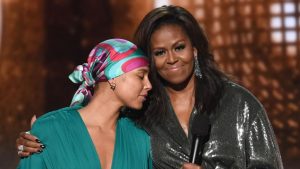 The Grammy Awards are arguably music’s biggest night the year. But this year, with the drama leading up to the show on Feb. 10, some viewers tuned in to see who was missing rather than who was there.

First Twitter was abuzz with a disagreement between the Grammy producers and Ariana Grande. She was not afraid to say “Thank U, Next” to an invitation to perform and attend the Grammys despite being heavily advertised as being part of the show. Grande felt “insulted” by the Grammy producers because she felt they had too much control over her song choices.

“Variety” reported that producers wouldn’t allow her to perform “7 Rings” and only allowed her to sing a “7 Rings” medley and another song of their choosing. In an “Associated Press” interview, Grammy producer Ken Ehrlich said that “[Grande] felt it was too late for her to pull something together for sure.”

Grande was furious about his comment and on Feb. 7. tweeted, “I’ve kept my mouth shut but now you’re lying about me. I can pull together a performance over night and you know that, Ken. It was when my creativity & self expression was stifled by you, that I decided not to attend.”

Drake, Kendrick Lamar and Childish Gambino also opted out of performing. Of the three, only Drake came to the event. Drake’s acceptance speech after winning Best Rap Song for “God’s Plan” was surprisingly cut off. In his speech he directly dissed the Grammys. “Look, if there are people who have regular jobs who are coming out in the rain and the snow, spending their hard-earned money to buy tickets to come to your shows, you don’t need this right here. I promise you.”

As for the awards, Lamar led this year’s nominations with a total of eight, including album of the year for the “Black Panther” soundtrack followed closely by Drake who had seven nominations. Childish Gambino scored big by winning Song of the Year and Record of the Year for “This Is America.”

It’s unknown exactly why Childish and Lamar did not attend, but rap artists have been known for being snubbed at the Grammys which could have influenced their decision. On the other hand, many viewers wondered if Gambino wanted to make a huge statement and lasting impression by not attending to create more political discussions relating to topics like “This Is America.”

Drama was also centered around the number of female winners. Last year the show made headlines when Alessia Cara was the only woman to win a solo Grammy. Comments by Grammys president Neil Portnow that female artists should “step up” also sparked commotion and added fuel to the #GrammysSoMale hashtag. This year, 15 women were nominated in the big four categories, including Lady Gaga, Chloe x Halle, Brandi Carlile, Janelle Monae and Cardi B. However, the “queen of pop,” Taylor Swift, did not attend due to her filming schedule for “Cats.”

The British singer, Dua Lipa, added heat to the Grammys’ gender conversation after she won two awards for Best Dance Recording and Best New Artist. During her acceptance speech, she made a dig at Portnow. “I just wanted to say how honored I am to be nominated alongside so many incredible female artists this year because I guess this year we really stepped up,” she said.

That was a bold move by Lipa, but Cardi B deleting her Instagram over Grammy drama could be even bolder. Although Cardi B made history as the first solo female rapper to win best rap album for her debut album “Invasion of Privacy,” her celebration was short lived because of critics.

After Cardi B won Best Rap Album over Mac Miller’s “Swimming,” Ariana Grande tweeted “trash.” Some interpreted Grande’s tweet to be a direct response to Cardi’s win over Miller, the singer’s ex-boyfriend who died in September. Grande was quick to set the record straight, telling fans that she wasn’t bitter that Cardi won, but was upset that the Grammys invited Miller’s parents to the ceremony only to watch their late son lose. On Monday, Feb. 11, after speaking out against people who said the late Mac Miller’s “Swimming” should have won the Grammy, Cardi B deactivated her Instagram page for two days, until Feb. 13.

Jennifer Lopez also took the Grammys stage for a Motown tribute. Many have criticized the decision to pick a non-black singer for the performance – especially during Black History Month – when artists like Stevie Wonder or Gladys Knight could have been chosen. Audiences complained that doing this doesn’t allow Motown to be fully honored and embraced.

Although the Grammys were drama filled with shady speeches and missing people, viewers still enjoyed performances from popular artists as well as music legends like Dolly Parton and Diana Ross. As some artists sweep this Grammy drama under the rug and some choose to address it head on, fans wait to see how the award show will be affected next year.