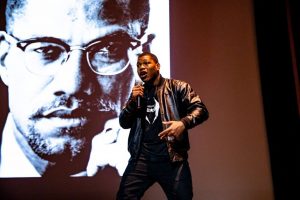 An 8:00 a.m. assembly on a Wednesday morning is never the first thing students have in mind after their long sleepless nights, but this assembly had each student wide awake with excitement and anticipation. Not only did the assembly provide background into the importance of African-American culture, it also opened eyes, allowing the Pace community to gain new perspectives.

The assembly, which took lots of time and careful consideration to plan, was the brainchild of Pace students. “I had sensed last year that some of our black students felt like there were other parts of our community that they would have liked to put in front of our upper school community,” said Director of Diversity and Inclusion Joanne Brown, speaking about last year’s Black History Month celebrations. “Rather than me trying to figure that out, I thought giving our students agency around the program would be really important and cool.”

In the months leading up to February, Mrs. Brown organized a group of students to take charge of the planning for Black History Month, and with the planning came the idea for this assembly. “Back in December, I opened up an invitation, inviting students who were interested in being part of the programming to meet for breakfast,” said Mrs. Brown. “Thirty students showed up to that first meeting.”

Students across all four grades were intrigued by this opportunity to share their experiences with the community. “I wanted to do this because in my four years at Pace I have experienced racial prejudice and just straight ignorant comments, and I felt it was time that we educate our community about black history and black culture,” said senior Alex Allen, who was a major contributor to the planning.

According to Mrs. Brown, the group soon began to create the framework for the morning assembly. “The students really wanted the assembly to be more celebratory and to reflect and showcase different parts of black culture that some students may not be aware of,” said Mrs. Brown. A group of 18 students and some faculty members started to lay out each piece of the puzzle, which they eventually fit together in a manner that expressed the messages clearly and uniquely.

“A lot of conversation and meetings aided the presentation of the assembly,” said sophomore Cole Middleton, who was instrumental in the planning process. “We worked hard to make this one a little more fun but also still educational.”

The morning began as spoken word artist Adán Bean presented a piece about black history that set the tone for the entire assembly. “The spoken word artist, Adán, is someone who I know, and him being available was really great,” said Mrs. Brown. “His piece gave a narrative of black history that used literature that we are all familiar with, so it was perfect because it allowed the audience to reflect.”

The next portion of the assembly entranced the audience as different students, sitting across the auditorium, participated in a call and response poem. This group of students had been meeting for some time to assign parts and practice their lines. “The students met many times because they wanted to try to present the poem in a way that would respect and honor the words in that piece,” said Mrs. Brown.

Soon after, J. B. Fuqua Chair of Speech & Debate Shuntá Jordan and sophomore Christian Bing presented a slideshow, in which they spoke about the history of black Greek-letter organizations, called “The Divine Nine,” and their roles in colleges across the U.S. Many were surprised to learn of all the faculty members who were in these fraternities or sororities in college, some of whom included Director of Athletics Troy Baker, Mrs. Brown and Ms. Jordan.

With regards to the black Greek-letter organizations, students learned about the history of stepping in these fraternities and sororities. Stepping, a African-American form of percussion dance in which the participant uses their body to create complex rhythms and sounds, is an important tradition that unifies many of these organizations.

They played a video of stepping, in which Beta chapter members of Alpha Phi Alpha conveyed black history through their dance. “I wish we could have brought a live step show, but the video of the Alphas from Howard University was a good representation,” said Mrs. Brown. “Hopefully, we can bring an actual step group in sometime soon.”

The assembly concluded with two songs, “GLORY” from the movie “Selma,” and the black national anthem “Lift Every Voice and Sing.” The audience was surprised and awed when Director of College Counseling Jonathan Ferrell began singing “GLORY,” with a voice that was reminiscent of Grammy-winning artist John Legend.

Along with Mr. Ferrell’s singing, senior Deron Moore rapped and Mrs. Brown and local singer-songwriter Natasha Williams harmonized to the melody while an inspiring slideshow played in the background. The slideshow displayed photos of different members of the African-American community, including famous activists, politicians, athletes and Pace community members.

At the end, the entire student body rose to sing “Lift Every Voice and Sing.” “Looking out into the audience, I noticed how everyone was really receptive to what was being presented, which was really moving,” said Mrs. Brown.

The success behind the assembly pointed to the involvement of not only faculty, but also the student body. The student-led planning group helped to create an impactful and memorable assembly that left all students excited for the rest of the school day.