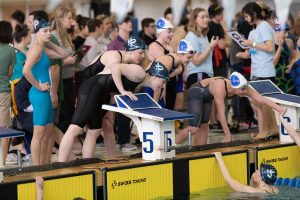 After nearly four months of practices, dual meets and team dinners, the Pace Academy varsity swimming & diving team competed in the GHSA Swimming & Diving State Championship meet at Georgia Tech Feb. 14-16. In a field of over 100 1-5A high schools, Pace went into the meet with representation in 16 events including the 200 IM, 100 Freestyle, 100 Backstroke and all six relays. The Knights finished the meet with three state championships, a state record, a Pace record and a bronze in individual medley.

Thursday afternoon, sophomore Lizzy Kaye competed to maintain her state title in diving. She did so easily, winning the 1-3A title and setting a state record. “I felt a little pressure going into the state championship because I didn’t want to let anyone down if it didn’t go as well as last year,” said Kaye.

However, she knew that if she was able to focus, she would be able to do some great dives, including her back 1 ½ somersault pike, which she got mostly 9s on. “When my last scores were posted and I saw that I had over 600 points I knew I had won. It was a really proud moment and felt great to have another state title.”

All of the swimmers who competed in prelims swam extremely well, and Pace was able to return to finals with swimmers in nine events, including five relays. The finals meet began with the medley relays. The boys relay of senior Charlie Kaye and juniors John O’Brien, Jason Rosenbloum and Dillon Carrol came in 10th place. The girls relay of juniors Erin Hood and Meghan McMillin along with sophomores Kaye and Amalie Little, got fourth, missing a spot on the podium by only .01 seconds.

Later on in the meet, the same group of girls lowered Pace’s record in the 200 free relay, which they had set the day before. “When we broke the record on Friday, and then again on Saturday, the entire relay broke the record, not just you, so it was a cool experience sharing the victory with Lizzy, Meghan and Erin,” said Little. The girls 400 free relay made up of seniors Sophia Lochan and Luisa Whitney, along with McMillin and sophomore Isabel Battista, also finished in 10th place, and each girl on the relay swam a personal best.

At prelims, Pace swimmers were represented in 10 different individual events. While McMillin, Little, Lizzy Kaye and Rosenbloum were unable to qualify for finals in their events, they all swam extremely well. All four of these swimmers were able to obtain their first individual state cuts this season.

Charlie Kaye and Hood each qualified for finals in both events, leaving Pace with individual representation in the 200 IM, 100 freestyle, 100 backstroke and 100 breaststroke. Hood was able to take home a bronze after her IM, and to no surprise, Kaye held his state title in the 100 back and won the state title for 100 freestyle as well.

In the end, the girls’ team came in sixth place for all 1-3A schools and the boys came in 12th. “I expect that our girls team will be even stronger next year with returning all but two girls and gaining some new freshmen that can contribute,” said head coach John Ague. “Next year the girls should have their sights set even higher.”

For seniors Charlie Kaye, Whitney, Lochan, Carter Frooman and Cole Campbell, this was their last opportunity to compete as high school swimmers. “It was really sad that it was my last meet ever but I’m also happy to have the competition swim days behind me,” said Lochan. “But it was great that I swam a personal best in my last meet.”