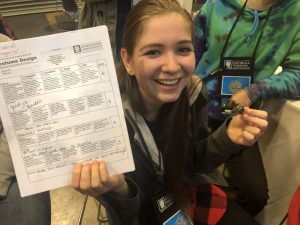 Over 5,000 students from Georgia gathered for the Georgia Thespian Conference (ThesCon) on Feb. 7-9 in Columbus. Students attending the conference participated in professional workshops and performed competitively against other high schools.

This is the second year that Pace upper school students have gone to the conference, with 19 students attending along with Upper School Visual and Performing Arts Chairperson Sean Bryan. While at the conference, the students watched scenes that other high schoolers performed, in addition to competing against other acting troupes. Pace students performed scenes from “Machinal,” “Proof” and “Rabbit Hole,” as well as a song from the musical “Hamilton.”

While some of the scenes involved large numbers of actors, some were smaller scenes requiring only two people. Pace seniors Raina Williams and Ania Briscoe acted out a scene from the play “Proof.” “It was a bit overwhelming due to the size and number of students in attendance, but it was a lot of fun because you are around a lot of kids who like the same things you like,” said Williams.

Mr. Bryan believes it is important for the students to be able to watch these performances because each teaches a unique life lesson. He also explains that the students who attend the conference have a deeper appreciation for what they are watching. “The audience is compiled of theatre artists, so they know that a high note was really hard to hit, or they know that set piece was really beautiful to look at, so they support them and cheer for them,” said Mr. Bryan.

Sophomore Jack Carson, who has been acting and singing since seventh grade, was one of several Pace actors who performed a scene from the play “Machinal.” He was also a member of the Pace ensemble who sang “The Schuyler Sisters” from the musical “Hamilton.” “It felt great being around like-minded people, and people who are passionate about the same things as me,” said Carson.

Sophomore Audrey Holton also sang “The Schuyler Sisters” from “Hamilton.” In middle school, Audrey attended the Georgia Jr. Thespian Conference as well as nationals twice, so this was her sixth time going to ThesCon. “We are really proud of our scores and work considering this is only the second year for Pace to go to Thescon,” she said.

“Basically the top tier is superior and if you get superior it’s really good,” explained Carson regarding the scoring at ThesCon. Junior Lauren O’Sullivan received just that. She earned herself a Superior ranking in Costume Design.