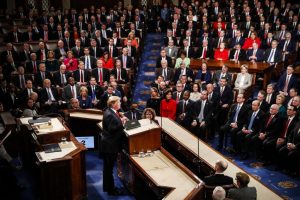 President Donald Trump’s second State of the Union address was surrounded controversy, given the nation’s longest government shutdown in history, as well as Speaker of the House Nancy Pelosi’s refusal to allow Trump to give the address in the House chamber until the shutdown was ended.

By the time of the event on Feb. 5, the shutdown issue had been temporarily resolved and the country’s thoughts turned to other matters to be covered by the president. Some members of the media projected that he would attempt to remain subdued compared to some of his past remarks. However, hours before the event, he spoke out against several top Democrats, as well as the late Senator John McCain.

At first glance, Trump seemed to deliver on the media’s projections during some parts of his speech, but there were still plenty of digs at Democrats, especially over immigration and a border wall. Some of Trump’s points, reinforced by the introduction of several American citizens, seemed to reach a large audience and may have garnered more support. However, among some of his more aggressive points, he called out New York and Virginia’s proposed abortion bills, asking for Congress to overturn them.

One moment that stood out was Trump’s remark on new jobs, specifically that 58% of these openings had gone to women. This prompted a roar of applause by the women in Congress, especially those who were elected in November. A sea of women, dressed in white in honor of women’s suffrage, rose in triumph, prompting Trump to congratulate them in a gracious way that is not often seen.

His discussion of immigration and the border wall was highly anticipated. He began this topic by stating some statistics about ICE since he became president, and he seemed to make a point of the use of heightened border control as a way to prevent sex crimes and trafficking, introducing ICE Special Agent Elvin Hernandez. With the possibility of another government shutdown on the horizon, it seemed like an effort to introduce different arguments to justify the border wall. While these are important issues to discuss, it’s doubtful that it will be enough to sway Congress to agree on spending billions of dollars on a “large down payment” that won’t solve many of the issues Trump claims it will.

While watching the State of the Union address, there were several moments where I couldn’t wait to look at a fact check. For example, I was inclined to check his statement that “the U.S. economy is growing almost twice as fast today as when I took office, and we are considered far and away the hottest economy anywhere in the world.” According to the New York Times, several other countries, including Latvia, Poland, China, India and even Greece, had larger economic growth than the U.S. Several of these countries’ rates of growth were double that of America last year.

His example of El Paso and the positive results of a border wall was useless, since El Paso was never “one of our nation’s most dangerous cities,” as Trump asserted. Even before barriers were fully built there, El Paso had the “second-lowest violent crime rate among more than 20 similarly sized cities,” according to the New York Times.

The portion of the president’s speech that was focused on foreign policy was perhaps the most confusing, especially his comment on North Korea. Given the rising tensions he helped fuel in the first year of his presidency, his remarks seemed highly hypocritical and were made without any evidence to back them up. “If I had not been elected president of the United States, we would right now, in my opinion, be in a major war with North Korea,” said Trump.

“President Donald Trump’s speech tonight was like watching Dr. Jekyll and Mr. Hyde give the State of the Union,” said Republican strategist and CNN political commentator Ana Navarro. While the address had its moments of apparent common ground, Trump avoided discussing many contentious topics, such as gun control. In order to truly get the nation on board with his policies, Trump must be willing to discuss the issues that the public demands of him.