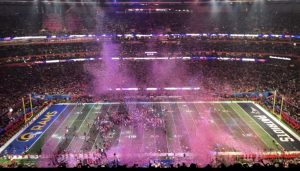 The Super Bowl teams were decided on Sunday, Jan. 20 when the Los Angeles Rams defeated the New Orleans Saints and the New England Patriots defeated the Kansa City Chiefs. The NFC Championship was the first game of the day, where a controversial call at the end of regulation sent the two teams into overtime.

On the first drive, Saints quarterback Drew Brees made an uncharacteristic mistake, throwing an interception to Rams cornerback John Johnson. The ensuing drive by the Rams was capped off with a game-winning field goal by All-Pro kicker Greg Zuerlein.

Later that day, the young, gunslinging Chiefs faced off against the experienced Patriots team. A back and forth battle between the best quarterback of all time, the Patriots’ Tom Brady, and the second year phenom, Chiefs quarterback Patrick Mahomes, needed overtime to decide who was going to Atlanta. But Tom Brady displayed his greatness, making three third down conversions on his game-winning drive, sending New England to their ninth Super Bowl appearance in 18 years

The Super bowl does not only affect the cities of the teams, but the game also has a huge impact on the host city. For this year’s game hosted in Atlanta, one million people traveled for the big event, filling Atlanta’s 96,000+ hotel rooms. These travelers brought 3.3 million dollars of revenue to Atlanta Airbnb alone. There are only 75,000 seats in Mercedes-Benz Stadium, so the vast majority of visitors did not actually attend the game. Instead, they came because of all the festivities held around Atlanta leading up to the big event.

On Saturday, the biggest names in the NFL traveled to the Fox Theatre for the NFL Honors, crowning the best players and performances from the past year. The main events, the Super Bowl Experience and Super Bowl Live, were centered in downtown Atlanta. The Super Bowl Experience was at the Georgia World Congress Center and was an indoor theme park with a wide range of activities for the fans. The highlight was the option for fans to take a picture with the Lombardi Trophy. Super Bowl Live was held at Centennial Olympic Park, which served as a central gathering spot for all the events with concerts, fireworks and other activities.

Many more private events were held, including the Host House at Stats Brewpub, a bar in the center of downtown. Another private event is called the Taste of the NFL where each city is represented with their own dish. This event also honored the 10th anniversary of the Steelers 2009 Super Bowl victory. There were countless other tailgates in downtown held by various companies, and many people entered the stadium around 2 p.m. when it opened on Super Bowl Sunday to enjoy the stadium’s food and experiences.

Finally, on Feb. 3, the time came for the two teams to square off. The cities of Boston and Los Angeles are a classic rivalry, for the two towns are far and away the best pro sports towns. The rivalry made the environment hostile between the teams and fans, and throughout the week the “Beat LA” chants could be heard. The Patriots looked strong on the opening drive as they drove the ball down the field, but the Rams defense picked off a tipped ball. Despite long-time Patriots wide receiver Julian Edelman’s best efforts, the first half was defined by the Patriots missing chances, including Brady throwing an interception, a turnover on downs, a punt and a missed field goal

The Patriots had five drives into Rams territory and were only able to capture three points in the first half, sending both teams into the locker room disappointed in their first half play.

The Pepsi Halftime show, headlined by Maroon 5 and including Travis Scott and Big Boi, was impressive. The music was highlighted by many special effects, including drone balloons that spelled out “One Love” and a ring of fire surrounding Travis Scott as he appeared on stage. Maroon 5 did a great job mixing their old music and new to keep the crowd entertained. Travis Scott, however, uses Auto-tune in his songs, so his voice sounded raspy and unnatural without it.

As the second half kicked off, the tension in the stadium grew as fans waited anxiously to see who would deliver the first big play of the game. Despite solid drives by the Rams, the first four drives ended in punts. Then the Rams tied the game with a field goal in the third quarter, making the Patriots even more anxious to deliver the Rams the final blow. The game trudged into the fourth quarter as both defenses proved their worth, making crucial stops until, with less than three minutes left in the game, the greatest player of all time, Tom Brady, went over the top and dropped it in the basket to tight end Rob Gronkowski for a huge gain to the two yard line. On the next play, rookie running back and UGA phenom Sony Michel plowed it in from the one, giving the Patriots a seven point lead with seven minutes left on the clock.

The Rams knew they needed a touchdown on their next drive and showed it as they put together their best drive of the night, getting deep into Patriots territory, but the Patriots pass rush that had been putting pressure on young quarterback Jared Goff all night, got through one more time. The hard rush forced Goff to throw the ball off his back foot allowing All-Pro cornerback Stephen Gilmore to make a crucial interception. At this point, the Patriots were in complete control of the game with 4:17 left and the Rams with only two timeouts. The Patriots reverted to their dominant run game and short passes to Edelman to drive down the field, leading to a game-securing field goal.

The confetti rained down amid deafening cheers as the Patriots won their sixth title in 18 years. The stage was rolled out and Patriots legend Vince Wilfork carried the Lombardi Trophy to the stage. Patriots owner Robert Kraft gave a speech to the Patriots nation, thanking the fans, Belichick and Brady as the constants through the 18 seasons. Next, the MVP award was given to Edelman for his 10 catches and 143 yards, an incredible accomplishment, given that he started off his career as a quarterback for Kent State. After the game, the celebrations commenced as the Patriots, with their Super Bowl LII win, secured their place as the best dynasty of all time.