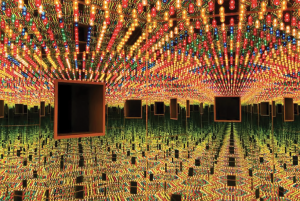 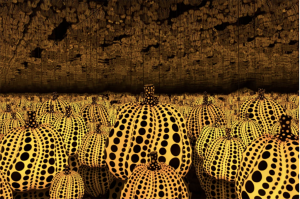 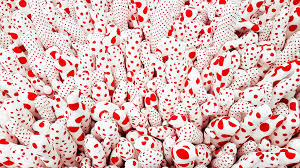 If you have been looking at your Instagram stories the past couple of months, you have probably seen pictures from a unique art exhibit. Opening on Nov. 18, Yayoi Kusama’s “Infinity Mirrors” runs through Feb. 17 in Atlanta. Having the exhibition in Atlanta’s own High Museum of Art was a huge honor for the city. The wildly popular exhibit has traveled across the county, earning immense praise.

Over 9,000 people per day visited Kusama’s exhibit in 2014, earning her the title of most popular artist of the year by the Art Newspaper. Within three days of tickets going on sale at the High Museum, all 92 days were sold out. The exhibit is known as the “’Hamilton’ of the art world” because of its popularity. In order to not completely shut out people who couldn’t get tickets in advance, the High is selling 100 tickets per day that are first come first serve.

The exhibit is set up so that there are seven different rooms. In the waiting lobbies are some of her other minor works and facts and pictures about the story of her life. Extensive background information and analysis of Kusama’s work, some of which is shared in this story, was provided in the form of placards throughout the rooms.

The first room is “The Souls of Millions of Light Years Away,” which produces a repetitive illusion through the use of lights and mirrors. Similar in appearance to stars in the galaxy, hundreds of LED lights hang and flicker in a rhythmic pattern that seems to suspend both space and time. This room is a break from her normal polka dots and step into the lit mirror rooms. This is my personal favorite; it gives one the illusion of traveling through the galaxy as a person in a fictional story.

In the 1960s, Kusama began sewing thousands of stuffed fabric tubers and grafting them to furniture and found objects to create her Accumulation sculptures, but she found this work mentally and physically taxing, so she utilized mirrors to achieve repetition. The breakthrough of using mirrors for repetition was very important to her career because it allowed her to increase productivity tenfold. The room casts the visitor as the subject of the work, a feature that the artist demonstrated through a provocative series of self-portraits in which she used her body to activate the space.

The “Love Forever” room is hexagonal in shape and mirrored on all sides. Love Forever features two peepholes that invite visitors to peer in and see both themselves and another participant repeated into infinity. She created Love Forever while experimenting with new technology, and she viewed her work as a “machine for animation.” For the artist, the concept of Love Forever stood for civil rights, sexual liberation, the antiwar movement and the activist groups of the 1960s.

In 1996, Kusama began creating a series of installations incorporating polka-dotted balloons. The most famous of these works is “Love Transformed into Polka Dots,” a room where balloons hang from the ceiling and occupy the floor, disrupting the viewer’s path. Visitors can enter the mirrored room through a door that leads inside a large balloon.

The other option is to peer through a peephole to see an image of an infinite number of pink polka dot balloons. The work engages visitors on contrasting scales: the tiny micro-space seen through the peephole and the macro life-sized space that envelops the viewer within the installation. The two different ways to see the balloons with polka dots shows her view that there is more than one way to view love.

In “Infinity Mirrored Room – Aftermath of Obliteration of Eternity,” golden lanterns flicker, creating a shimmering pattern of light that contrasts with the seemingly endless void of the mirrored black space. For Kusama, obliteration is a reflection on the experience of death and the potential of the afterlife. The imagery in this work recalls the Japanese tradition of toro nagashi, a ceremony in which paper lanterns known as cochin float down a river to guide ancestral spirits back to their resting places on the final night of the summer obon festivals.

The ceremony often commemorates the victims of the atomic bombs. Mesmerizing and intimate, Kusama’s poetic installation highlights the impermanence of life and the certitude of death. The room truly makes the viewer feel as if they are attending the ceremony in Japan on a hot night.

Coming from a family that cultivated and sold plant seeds for a living, Kusama saw a pumpkin for the first time during a childhood visit to a seed-harvesting farm with her grandfather. Nestled into the landscape between fields of zinnia, periwinkle and nasturtium flowers, she spotted an unusually shaped gourd the size of a man’s head. The artist was attracted to the pumpkin for its “charming and winsome form,” celebrating its lumpy, unpretentious, organic shape.

The pumpkin motif first appeared in some of Kusama’s drawings from the late 1940s and has repeatedly shown up in her paintings, sculptures, drawings and installations. The glowing pumpkins, modeled after the Japanese kabocha squash, are married with Kusama’s signature polka dot pattern within an infinitely repeating space. She showed her famous pumpkins though the exhibition’s room entitled, “All My Eternal Love for the Pumpkins.”

The last room of the exhibit gets everyone involved by having the audience as a whole create the room. This room is called “The Obliteration Room,” and it starts out completely white, including the furniture. Attendees each get a sheet of paper with four stickers to stick around the room. The room is now covered in colorful dots.

Kusama writes fiction and poetry and has won prominent awards in Japan for these works. Her interest in sexuality led her to encourage her followers to use nudity to express themselves, and in the late 1960s she scandalized the New York streets by leading bands of naked people covered in polka dots. New York was not the only place; she organized similar events in places across the United States and Europe. Her biggest attempt at using sexuality was the “nude revolution” she tried to start in Japan, but authorities and a conservative culture led to her getting arrested many times and the revolution failed.

Kusama recently partnered with luxury retailer Louis Vuitton on a collection of colorful handbags, dresses and shoes speckled with the artist’s iconic polka dots. Kusama’s great artistic accomplishments earned her a spot on Time magazine’s “100 Most Influential People” list of 2016.

She opened the Yayoi Kusama Museum in Tokyo last year. The museum itself is a work of art, with the stairs having windows and the rest being white, making the whole building look like never-ending stairs. She claimed it was one of her greatest accomplishments to have her own museum. Kusama is now 89 years old and still makes art in her Toyko studio daily.