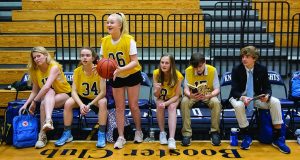 The actors in the Upper School’s Winter Showcase, performed Jan. 24 and 26, brought laughter and warmth to otherwise chilly nights in the most astounding ways. Audience members gathered in the Fine Arts Center for opening remarks and an opening act, and then dispersed in three smaller groups across Pace’s campus for performances of multiple scenes, some of which were written and directed by Pace students.

The showcase birthed life into various corners of the school, including the FAC lobby, middle school rotunda, Inman gym and band room. The traveling audience experienced one incredible scene after another, each scene raising the bar a little higher for the following one.

The opening act was a hearty welcome from senior actresses Abby Ray and Emily Schmitt, who were equally hilarious and compelling as their characters Gil Faizon and George St. Geeland, respectively. The scene was directed by senior Davis Mathis.

The characters were inspired by John Mulaney and Nick Kroll’s comedy, “Oh, Hello.” The characters described their vibe as “when you hit the bottom of a tub of hummus, and your carrot can’t quite reach the bottom of the jar, so you got to use your fingers to scoop it out.”

The pair’s nervous energy and character tics directly converted into laughter and excitement for an eager audience. And despite their full-fledged accents and new personas, the actresses’ diction was still impeccable. Every word was heard, understood and loved.

On top of how obviously prepared and believable the actresses were, the thoughtful costumes effectively helped to transport the audience into a goofy universe of the past. Stated simply, Ray and Schmitt nailed it.

The Showcase also featured two impressive student-written and directed works, an untitled piece by senior Ania Briscoe and a scene called “Disorderly Conduct” by junior Jackson Gray. Briscoe’s work brought to life an unimaginable and quite literal breaking of the fourth wall, the imaginary barrier that separates the actors from their audience.

Actors for the scene included juniors Emerson Barrett and Matthew Quintana, along with sophomores Harley Ryan, Denzel Welsh and Alivia Wynn. Ryan should be proud of his priceless portrayal of the scene’s “director,” who, in some ways, resembled Pace’s own US Visual & Performing Arts Chairperson Sean Bryan.

In “Disorderly Conduct,” senior Jacob Sloman got to exhibit his wide range of theatrical talent in his role as a detective with multiple personalities, using varying accents, expressions, voices and volumes. The scene’s other actors, who were quite effective, were juniors Harris Greenbaum, playing Johnny, and Kellee Kindle as Officer Davidson. Kindle also directed and adapted to the stage a scene called “Roxanne,” with Quintana, Ryan and Wynn as actors.

Another highlight of the show was a standout performance by junior Nikki Rubin and sophomores Audrey Holton and Olivia Ullman. The trio harmonized to produce a beautiful rendition of “Schuyler Sisters” from Lin Manuel-Miranda’s popular broadway hit show “Hamilton.” This scene is being performed at the 2019 Georgia Thespian Conference (ThesCon) Feb. 7-9, along with two other scenes from the Winter Showcase: “Machinal” by Sophie Treadwell and “Proof” by David Auburn.

In “Proof,” audiences witnessed senior Raina Williams’ character’s sweet, delicate nature develop into a heartbreakingly intense personality, frayed by her anger and grief over her father’s death and a disconnect to her sister. The scene, directed by Mr. Bryan, also featured actors Gray and Briscoe. If these acts are as compelling at ThesCon as they were at the Winter Showcase, Pace’s thespians should earn the recognition they rightfully deserve. Good luck, Troupe 4424.