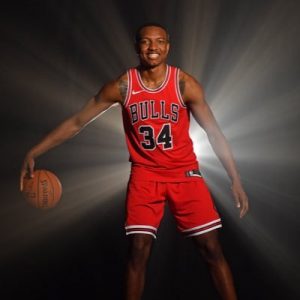 In June, Pace Academy’s very own Wendell Carter, Jr., Class of 2017, began his career in the National Basketball Association with the Chicago Bulls following a standout season at Duke University. The Bulls selected Wendell seventh overall in the NBA draft making him the first ever professional basketball player from Pace.

Wendell did not make the trip to Chicago alone; his parents moved to Chicago with him. They moved with him in order to maintain the close and supportive role that they have shown for the last 19 years of Wendell’s life. Wendell has long credited his parents as the reason for his success.
In a recent article in “The Undefeated,” Wendell’s mother Kylia Carter explained their decision to accompany Wendell to Chicago, saying, “every other 19-year-old kid lives at home with their momma, so why do we become ‘helicopter parents’ because our kid’s a millionaire and we still want him at home with us?”
That traditional parenting seems to have served Wendell well. While at Pace, Mrs. Carter was a frequent attendee at school events and was also encouraging of Wendell’s participation in all aspects of the Pace community – not just the basketball program.  Students who knew Wendell while he was at Pace remember his prominent role in the school play, as well as his blog in the Atlanta Journal-Constitution (AJC). Wendell has also made a point, despite his newfound fame, of returning to Pace Academy’s Keeping Pace summer program to spend time with the participants and counselors and talk about his journey.
At the beginning of the NBA season, Wendell came into his own quickly for the Bulls, performing both offensively and defensively. December was a tougher month for Wendell where he averaged 3.6 fouls and 23.4 minutes in eight December games — a full two minutes less than he averaged in November, which he ended with a career-high 28 points against the Detroit Pistons. Regardless of the December dip, Wendell was enjoying an impressive rookie campaign, putting up 10.3 points, 7 rebounds, and 1.3 blocks a night over 44 games – numbers that had him top eight or better among rookies in all three categories.
On Jan. 16, Wendell suffered a potentially season-ending thumb injury in the Bulls’ loss to the Los Angeles Lakers. NBA.com recently reported that doctors have determined that he will need surgery, resulting in a recovery that is expected to take 8-12 weeks – appearing to bring an early end to Wendell’s first season of NBA play.
Regardless of where that path of surgery and recovery takes him, it seems certain that Wendell will continue his journey with humility and grace, guided by the love and support of family – including his extended family of supporters at this high school alma mater.