There’s No Place for Blackface in Modern Society 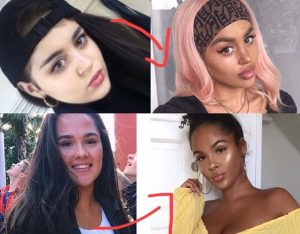 In the wake of a trend of “blackfishing”– a term coined by the internet that is used in reference to Caucasian women masquerading as black people, I find it necessary to address the issue of blackface. Just recently, a female Oklahoma University sophomore posted a video to Snapchat where she had painted her face and hands black and used a racial slur. The video was shared on Twitter on Jan. 18 and went viral, leading the University of Oklahoma president to condemn her actions. Though many may see blackface as harmless, it has dark roots, stretching all the way back to the 1800s.

A minstrel is defined by Merriam-Webster as a “member of a band of entertainers with blackened faces who performed songs and music ostensibly of black American origin.” Basically, these were white people, generally men, who would paint their faces and bodies black, paint their lips to make them seem large, bright pink, and primate-like, and make a mockery of traditionally black music. There’s a lot to unpack there.

Many probably saw blackface as just a game, a silly costume that was used to have fun, but it affected black people in America back then and affects black people now. Oftentimes, they would portray the black man as a sexual deviant, which led to an obsession with protecting white women from the “evil black man.” They portrayed all black people as silly and fun-loving, with too few brain cells to make complicated decisions. Not only are these stereotypes horribly offensive, but the sexual deviant stereotype in question has literally killed black men for ages. One such victim was named Emmett Till.

Emmett Till was a 14-year-old black boy from Chicago visiting his uncle in Mississippi for the summer of 1955. A white woman named Carolyn Bryant accused him of wolf-whistling at her and being sexually threatening towards her while she worked the counter at a shop. Her male relatives then found Till, beat him with various objects, mutilated him, then shot him in the head and dumped his body into a river. He was completely unrecognizable when he was finally found.

His mother had an open-casket funeral for him, so that she could show the entire world what they did to her son. People were lined up outside of the church to show their support and love for her. You can look up pictures of his body, but even cleaned up for the service, they are incredibly graphic, and you should be sure to carefully consider whether or not you have the stomach for it.

Till was only one such victim of this stereotype, on a list of countless others.

Now, how is this connected to white women wearing dark foundation and posing as black girls online, you ask?

White women were generally the cause of these hideous lynchings, wittingly or not. So, for them to darken their faces, purposefully enlarge their lips to imitate those of black women, and wear hairstyles that are important to black culture, such as cornrows, box braids, etc., it completely disrespects the history of minstrelsy and lynching in America, which cannot be tolerated.

All in all, it all circles back to a trend of ignorance. People are completely ignorant of more than the basic truths of what it was truly like for black people in the past, and so they do these things (generally) not out of hatred or aggression, but because they don’t know better. However, it’s important for people to understand that what’s a joke to you has a dark history that includes the killing and persecution of innocent people.