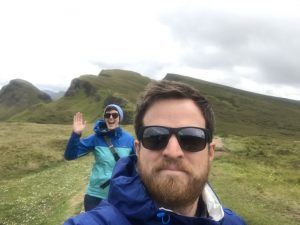 The Terrys hike the Quiraing on the Isle of Skye in Scotland, combining two of their favorite hobbies: traveling and exploring the outdoors. Photo: John Terry

Whenever someone mentions Westminster, many members of the Pace community instantly become super competitive, thinking about the rivalry between the two schools. However, this is not the case with everyone at Pace. Upper school history teacher Caitlin Terry has a more positive opinion of Pace’s backyard rival, because her husband, John Terry, works there.

The couple met at the University of Virginia while both were studying history and they have been together ever since. They connected in an Italian Renaissance class. One day when the class ended, Mrs. Terry (then Ms. Morris), made the move to ask Dr. (then Mr.) Terry out. “I asked him if he wanted to go get coffee or a drink, and now we have been together for eight years,” said Mrs. Terry. “It’s perfect because we are just two nerds together.”

After both completing their studies, the Terrys moved down to Atlanta, where Mrs. Terry soon began her new job at Pace. The situation worked out perfectly, as within two months of transferring south, Dr. Terry was hired at Westminster.

Unlike what many may expect it would be like to have a spouse working at a rival school, the Terrys actually find it rewarding to be part of two different communities. “We are lucky only being a mile apart because we get to carpool to work each morning,” said Mrs. Terry. “It is definitely a nice way to start each day.”

According to Mrs. Terry, she also finds it fun to be able to go over to Westminster to see events that her husband leads or takes part in. “I like to watch their theatre programs and sporting events, and I also like his co-faculty members,” said Mrs. Terry. “We each have our own professional worlds and we don’t see each other all the time, but when we do, we make sure to ask how one another’s day has been.”

The Terrys share many interests, one of which is exploring history both inside and out of the United States. “We love to travel,” said Mrs. Terry. “We are going to London for spring break, which is really fun because it is just two history teachers together, and we both get really excited about the same things.”

They also enjoy the outdoors and being in nature. Two years ago, they took a trip to Asheville, North Carolina. While on a hike, Dr. Terry asked Mrs. Terry out of the blue if she wanted to get married, where she responded with yes. “There was no ring, nothing Hallmark Channel romantic about it, but that is who we are,” said Mrs. Terry.

In their free time, they also love to watch various television shows, like “Queer Eye” and “The Great British Bake Off.” “We do a lot of stuff together, but that is because we genuinely enjoy one another’s company,” said Mrs. Terry.

As Valentine’s Day approaches, many couples have already begun making extravagant plans for the night, but the Terrys have different plans for the day. “We don’t do Valentine’s Day because we both think it is ridiculous,” said Mrs. Terry. “I think it can be really detrimental that there is only one day that you have to prove your love to someone by buying them a ton of stuff. It is not who either one of us are.” The Terrys plan to stay at home, cook a nice dinner and watch Netflix together.

Rather than celebrating their relationship on one single day on Feb. 14, they express their love throughout the year. “When the feeling inspires us, we do little things for each other,” said Mrs. Terry. Sometimes, Dr. Terry will leave sweet little notes for Mrs. Terry and other times they will decide to go out for a nice dinner.

The key to their marriage seems to be the support they provide for one another. Both Terrys take time to check up on their spouse and be there if they need anything at all. If one is having a rough week, the other makes sure to be there for them.

“It is a relationship where we have both been through a lot in terms of families and professions, where we have had to support one another at different times,” said Mrs. Terry. “It is nice to have that person that you can rely on and go through life with.”