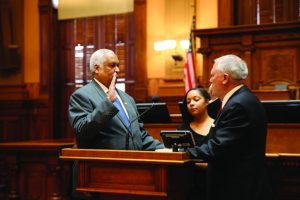 Where were you in 1969? Many were watching the Apollo 11 launch while others were enjoying Woodstock. In 1969, Judge Clyde L. Reese III was just 10 years old and starting sixth grade at Pace Academy.

This fall marks the 50th anniversary of the arrival of Judge Reese, his cousin Marsha Reese and her cousin Alonzo Brown at Pace Academy. They were the first black students to graduate from Pace.

“There weren’t any other black students there for us to interact with,” said Judge Reese. “Except for my family, there were no other people who looked like us.” He recalls having to “get used to” the only black people on West Paces Ferry Road being maids getting on the bus at the end of the day. He remained one of only a handful of black students up to his graduation from Pace in 1976.

Brown vs. Board of Education, the landmark Supreme Court case declaring that racial segregation of children in public schools was unconstitutional, was decided in 1954. The integration of Atlanta Public Schools began in August 1961 with the enrollment of nine black students at four all-white high schools.

Head of Upper School Michael Gannon’s 2004 Master of Arts thesis, “From White Flight to Open Admissions: The Founding and Integration of Private Schools in the City of Atlanta 1951-1967,” offers insight into Judge Reese’s integration story. It examines how Atlanta’s private schools dealt with the societal changes during this era. Mr. Gannon chose this topic because of his observations of the complicated and slow public school integration process in Atlanta.

In terms of private schools, Westminster was founded in 1951 and Pace opened in 1958. Although founded much earlier, in 1926, Lovett denied admission to Martin Luther King III in 1963. All three schools were marked as “segregationist white flight schools” who were “really slow and really late in the integration process,” according to Mr. Gannon.

Pace first integrated in 1966 with a kindergarten student. According to Mr. Gannon’s thesis, in July 1966 while Headmaster Frank Kaley was on vacation, an application for admission was made for the young African American boy.

He arrived at the school with his parents, and high school principal Bob Chambers, who was in charge in Kaley’s absence, conducted an interview and administered an entrance exam. Chambers then called Board of Trustees Chairman Russell Bridges to notify him that the boy had passed his entrance exam.

Most of the families did decide to stay, although the school had previously budgeted and hired staff for an increase in enrollment that year. That enrollment increase did not materialize, leaving the school on shaky financial footing.

Pace was also worried about “backlash and violence” from their community when integrating, according to Mr. Gannon. He describes Atlanta private school integration as having “lots of resistance and then people suddenly thought maybe we should do this.”

Mr. Gannon’s research has helped him appreciate “how far Pace has come in our 60 years” with his long lens of history of the school. “Some of what I learned informs my decision making today,” he said.

The story of Judge Reese and Pace starts with cousin Marsha Reese who lived in Atlanta with her family. Judge Reese’s father decided he would move his family from Florence, South Carolina and join his brother, Marsha’s father, in the real estate business. His family operated Brown and Reese Realty, one of the first African American-owned residential brokerage firms in Atlanta. Young Clyde Reese arrived in Atlanta three weeks before school started not knowing where he would go to school.

While Judge Reese’s older sister by four years was allowed to go to public school, Westlake High School in Southwest Atlanta, he was encouraged to join his cousin at Pace Academy. “When they told me they didn’t have football, I didn’t want to go,” he said.

In high school, Judge Reese played every type of sport there was, including soccer, basketball, baseball and track.  “There were a couple of times when I wanted to go to public school, mainly because I wanted to play football and there was no football team back then,” said Judge Reese. His involvement in sports meant he spent most of his time at school, making “church the only day [he] got some different type of activity.”

Judge Reese rarely saw other black people except when he went to church. Even when facing opposing teams from schools like Westminster and Lovett, he said he “never saw anybody who was black.” Judge Reese said that when going to games at other schools, sometimes he would “get stuff coming back at [him] from opposing teams and their fans, being the only black person on the team.” He still truly enjoyed the sports he played and his supportive teammates.

Beyond race, another factor that separated Judge Reese from other students was money. “We were not a financially well off family,” he said. He was in an environment where the majority of students were rich. “We might go out after a basketball game and I might’ve had $10 and they had $200,” he said.

During spring break or summer Judge Reese recalls students going to their houses on St. Simons Island. They would invite their other classmates, but never him. “When you’re little, you don’t really realize why and you get older and you figure out that ‘we’ don’t get invited to those types of things,” he said.

When asked if he would go back and go to Pace again, Judge Reese answered “no,” for two reasons. “One, I wanted to play football,” he said. “And as I look back on it, I think Pace was financially kind of a burden for my family, and I didn’t even realize they sacrificed a lot for me to go there.”

But Judge Reese’s experience at Pace was very good from an educational standpoint. “[It was] a top notch education; there is no question about that,” he said. Academically it gave him a good start for college and what he did after. In dark times when he wanted to quit and go to a public school he is glad he stuck it out. “Academically, it prepared me for anything, and socially, I learned how to deal with all types of cultures different from me,” he said.

Socially, however, Judge Reese didn’t get to participate in all of the school events like prom because, as he put it, there were “no black girls except for [his] family and no interracial relationships.” At the time, interracial dating was taboo. But overall, he remembers the Pace community as being very nice, with “no outwards racial incidents at all.” He did recall one intense situation in middle school, however. “One guy in sixth or seventh grade called me a name and we got into a little scuffle,” he said.

Judge Reese said that the faculty and administration at Pace treated him well. Favorite teachers included Charles Owens, Helen Smith, George Mengert and basketball coach Bob Chambers. Mr. Owens taught math, was the baseball coach and the assistant basketball coach. He was the only person who lived out where Judge Reese lived and sometimes he would give him a ride to school. Ms. Smith’s history class was his favorite. “I can’t believe she is still there [at Pace teaching],” he said.

When Judge Reese got into the professional world he said he was ready because he learned “how to be very comfortable in a diverse environment” at Pace. For those who ever feel like an outsider, Judge Reese advises to “grind away every day and get to the finish line because having that is going to help you going forward.”

Judge Reese spent more than 20 years in a variety of legal positions prior to his appointment to the Court of Appeals of Georgia on Nov. 1, 2016 by Governor Nathan Deal. He earned a Bachelor of Arts degree from Georgia State University in 1980 with a major in world history and a minor in economics. In 1993, Judge Reese entered law school at the Walter F. George School of Law at Mercer University and graduated in 1996 with a Juris Doctor degree.

Much has changed since Judge Reese went to Pace. He is delighted to see more minority kids displayed in Pace’s magazines, a Pace football team, and a student who went to the NBA (Wendell Carter, Jr.). “Its just nice to see that, knowing where I started,” he said.

In 1969, social unrest marked the times. Dr. Martin Luther King, Jr. had been killed the year before in April 1968. The voting Rights Act was signed into law just three years prior to Dr. King’s death, in August 1965. Judge Reese said that with this backdrop, “for some reason [Pace] decided that they would integrate.” From a societal standpoint, he “commend[s] them for that.”

Still, there are no heroes in the story. “They should all be ashamed of themselves,” Mr. Gannon said. While it’s true that Pace was one of the first Atlanta private schools to integrate, he said that “no one gets a trophy for how they behaved in the era.”