Students Suffer from Lack of Sleep 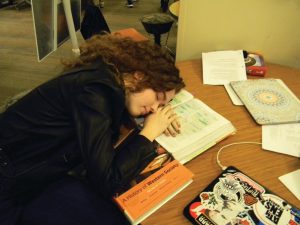 For teenagers, the recommended amount of sleep is between eight and 10 hours. Some students, however, are only getting about half of that. With extracurriculars every afternoon and homework piling up, potential hours of sleep begin to disappear.

Sleep deprivation is a problem that is common among students across the nation. This lack of sleep translates directly into an inability to perform well in a classroom setting. “Less sleep equals less focus the next day,” said upper school guidance counselor Sara Eden. “If you are yawning or having trouble staying awake, you are not going to hear what the teacher is saying or be able to engage in class in the way you should.”

Through many studies and observations, doctors have concluded that the amount of sleep teenagers receive not only immediately affects grades and classroom performance, but can also create health risks. According to a study conducted by the Centers for Disease Control and Prevention, close to 70 percent of students get an insufficient amount of sleep. The study concluded that these students are more susceptible to excessive drinking, smoking and depression.

The results of a Knightly News survey of Pace upper school students indicate a clear trend of students getting insufficient hours of sleep each night. Of the 130 students who responded to the survey, only about 10% get the recommended amount of sleep, and within that group, 6% are getting the bare minimum of eight hours. The reason? One factor is likely students’ busy schedules. Students at Pace are encouraged to participate in multiple clubs and sports while also taking rigorous academic courses that require hours of homework and studying for assessments.

With all of the tasks students must complete each day, sleep is lower down the list for 85% of students, according to the survey. “The students have a lot of work and a lot of responsibilities,” said Mrs. Eden. “Even with really good time management there are only 24 hours in a day, so sleep often becomes less of a priority when you feel like you can use that extra hour to study.”

The epidemic of sleeplessness is a problem with no simple solution. Some experts have suggested changing the start of the school day to a later time to allow students to get more sleep. Although this may seem like a good idea, having school start later may just encourage some students to stay up later because they believe they will have more time to sleep in. Other experts suggest going to bed and waking up at a regular time every day, including weekends, because it helps people get in a rhythm and makes getting up easier. However, this proves difficult for most teenagers. “Developmentally you are not naturally going to wake up at 5 a.m. and then go do stuff,” said Ms. Tuttle.

Another solution is to set an alarm which signals to stop doing work. “Set an alarm for 10:30 p.m. and wherever you are in your work, you stop,” said Mrs. Eden. “It does not matter what is left undone,” said Ms. Tuttle. “Go to bed and figure it out tomorrow.”

Students are suffering from sleep deprivation all over the country. Solutions are scarce and temporary. If students do not find a way to get more sleep, the side effects and consequences will continue to burden them years later. “It’s kind of a lifelong challenge,” said Mrs. Eden. “There are always going to be lots of things pulling you in different directions, but [lack of sleep] will affect your performance, whether it’s as a student, as an athlete or on the job later.”