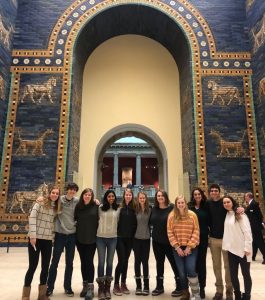 Eleven seniors and three teachers said “guten tag” to Germany on Jan. 12, traveling on the Isdel Center for Global Leadership study tour to Berlin and Munich. Led by history department chair Tim Hornor, the 10-day trip zeroed in on German life and policy, especially during and after World War II. Also chaperoning were math teachers Heather McCloskey and Jason Smith.

Students were exposed to lots of art, as well as several types of architecture. “Some moments in art history shone through intensely, but the core was Germany, specifically 20th century history,” said senior Annabelle Critz.

A student and teacher favorite was the Neuschwanstein Castle outside of Munich and the horse carriages the group took to reach it. “It was really pretty and it was snowing a lot, which made it even prettier,” said senior Sophia Lochan.

Opened to the public weeks after the death of King Ludwig II, 1.4 million people visit the “castle of the fairytale king” each year, according to the castle’s website. The picturesque castle, surrounded by snow, allowed for the students to take in the beauty of Germany and spend time learning more about the art and architecture that plays a major role in German culture.

The group also attended a symphony by the Berlin Philharmonic and an opera in Munich. This was just one more way for Pace students to take in the culture and life in German cities. However, students weren’t the only ones to learn something new. “As a math teacher, I am not very into history and art, and Mr. Hornor has taught me a lot about the subjects covered on the trip, even events that I was alive for,” said Dr. McCloskey.

When talking about Germany and the country’s involvement in World War II, the Holocaust is one of the first things that comes to mind for many. Therefore, visiting memorials and dedicating time to learning about the Holocaust were a must. “My favorite memory was walking around the Holocaust Memorial in Berlin,” said senior Annabelle Critz. “It was such a fitting and desolate piece of experiential art that it was impossible to not be affected by it.”

From a teacher’s perspective, the trip was a great way to get to know students they had never taught before, as well as those they had. “It’s nice to meet students in a non-classroom setting,” said Mr. Smith. “You get to know them much differently than if you’re teaching them, say, algebra.” Dr. McCloskey agreed, saying, “I had taught three of the students before, but it was fun to get to know those students better, too.”