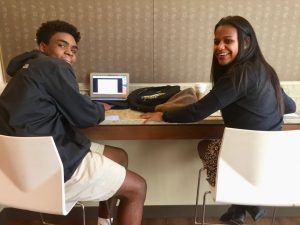 While most students were at school on Jan. 24 and 25, three freshmen, two juniors and seven seniors spent their day at The Marist School participating in 2019’s Atlanta High School Model Arab League (MAL). With 22 countries represented, Pace was able to obtain two delegations, Morocco and Libya. This allowed a more diverse group of students to participate, with Pace delegates from three out of the four upper school grades. Last year, Pace received an Honorable Mention for its Qatar delegation, and several students received Honorable Mentions and Outstanding Delegate awards for their work.

Historically, most of the students who go to MAL are students of history teacher and Model United Nations (MUN) sponsor Helen Smith’s AP Comparative Politics class; however, the addition of Pace’s second delegation allowed the opportunity for students from all grades to participate, two of whom signed up the week of the conference.

Many of these students had participated in MUN before. MUN operates much the same way as MAL but is much larger in scope with a pool of 193 nations compared with MAL’s 22 League of Arab States nations. “Model Arab League is more similar to Budapest than Tufts [Inquiry] because everyone that attends takes the conference seriously,” said senior Devan Johnson.

The prior experience that many students had, as well as Marist’s proximity to campus, allowed students to streamline their research process to the point where preparation for MAL took place solely in the week and a half leading up to the conference.

Delegates spent time preparing for the conference at home, as well as with Ms. Smith. “In researching Libya, students dealt with a failing state that didn’t have order,” said Ms. Smith, explaining that the experience “shows the impact of Western involvement in Middle Eastern countries.”

Although much of what happens at MUN and MAL conferences is based on current events and real-life issues, delegates may take matters into their own hands and put their own spin on the crises happening around them. “Saudi Arabia had a lot of arguments with smaller countries about the refugee crisis, which was very interesting considering they are one of the leading causes of refugees in the Arab League,” said senior Ahsan Hennings, one of the five AP Comparative Politics students at the conference.

In the end, Pace students’ efforts were rewarded. The delegation of Morocco, made up of freshmen Kargil Behl, Leah Favero and Pranavh Pradeep, and seniors Aaron Pascaner and Kathryn Reisner, was awarded an Honorable Mention. Pradeep also won an individual Honorable Mention, while Behl and Favero, along with junior India Behl from the Libyan delegation, received Outstanding Delegate awards.

For the seniors who attended the conference, it was one of their last opportunities to participate in the program, and Hennings and senior Tase Karamanolis both expressed regret that they hadn’t gotten involved with MAL and MUN earlier in their high school career.