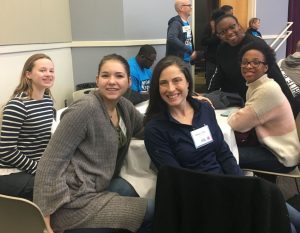 We started with an extremely inspirational speaker, Terence Lester, founder of “Love Beyond Walls,” an organization started to alleviate the nation’s homeless crisis. So far, he has seen great success, and has been featured in stories on multiple national news outlets.

He spoke about his organization, how he got where he is, and the struggles he faced pursuing certain goals. For instance, during his solo walk from Atlanta to Washington, D.C. to call attention to the homeless crisis, a driver of a truck bearing Confederate flags attempted to mow him down.

After his powerful presentation, we split into groups to go to breakout sessions. This was the most rewarding and fun part of the day. “Everybody there was really nice and open to other ideas,” said Grabowski. We did multiple activities which inspired thought-provoking and meaningful discussion on everything from gender discrimination, racism, homophobia and transphobia. It was amazing to be in a room of (mostly) like-minded people, discussing topics in a completely safe space.

Many people got extremely vulnerable, confessing that they wouldn’t feel comfortable doing the same at their schools, surrounded by their peers. All discussions, even ones with slightly opposing opinions, were completely cordial and open, and there were nearly no arguments. “It was a really fun experience that made me feel welcomed and understood,” said Grabowski.