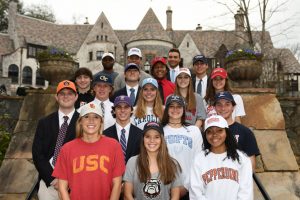 Nineteen Pace Academy athletes participated in National Signing Day held on Feb. 6. This early signing day is for senior students who have already verbally declared where they will be attending college.

This is the largest number of students to participate at Pace Academy ever, with 16% of the 119 members of the senior class committing. The signing ceremony in the school’s Fine Arts Center celebrated these students’ signed letters of intent to attend colleges in states as far away as California and as far north as Massachusetts.

All of these athletes are top performers in their sport. Some have broken Pace records, while others have achieved regional, state and even national recognition. To highlight a few, Pace Soccer player Hannah White made the U.S. National Team roster in 2016 and 2017 and was recognized as a 2018 All-American. Additionally, she was named one of the Elite Clubs National League’s top 10 players. She entered in the U.S. Youth Soccer Olympic Development Program back in 2013.

Star third-baseman Andrew Jenkins, a four-year starter for the Pace varsity baseball team, is ranked first among third basemen in Georgia and fourth nationally by Perfect Game. He is not only a beast on the field, but academically is a member of the National Honor Society and a recipient of the Jim and Leslie Wheeler Scholar Athlete Award and the Lance and Shield Award. Georgia Tech is currently ranked number 17 in preseason baseball so he will join a strong team.

Joelle Zelony has been a dominating force for the varsity girls basketball team since her freshman year. Zelony received First Team All-Region honors as a sophomore and junior, when she was also the team’s Co-Offensive Player of the Year as she led her team in steals, scoring and charges.

Congratulations to all 19 of our Knights!