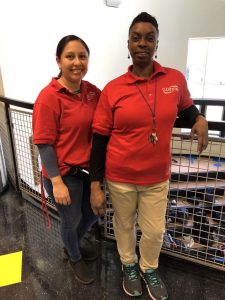 Every morning, Sonya McCullough arrives at Pace Academy and prepares to make her rounds throughout the school. She is one of the members of the cleaning staff, who often go unnoticed and unrecognized for their important work.

Ms. McCullough, along with her colleague Norma Rodriguez, work hard behind the scenes in the Upper School and the cafeteria on tasks that are vital to keeping the school and its students thriving. They are often at school on weekends as well, helping out with special events like the recent Lower School screening day on a Saturday and a book event in the Woodruff Library the following day.

Ms. McCullough is a friend to all in the Pace community. She’s a common face at Pace’s football games, wrestling matches, and other sporting events and is friends with many of the students and their parents. She said she “likes to rock her Pace gear,” and enjoys going to Pace’s athletic events not only to have fun, but also to cheer on the kids that know her so well. “I like to support the kids,” she said. “They work hard, they train… that’s the least you can do for them.”

The support she gives has not gone completely unnoticed. She recently celebrated her 34th birthday, and all the kids in the sixth grade sang “Happy Birthday” to her, and helped her clean the cafeteria tables. The varsity boys soccer team presented her with a bouquet of roses and her favorite type of cake, showing their appreciation for her support and friendship.

A native of Atlanta, Ms. McCullough went to cosmetology school after high school and worked at several salons. Later, she worked at Gate Gourmet, and then Holy Innocents’. She has worked at Pace since 2016.

She also works at Mercedes Benz stadium doing housekeeping at the AT&T Perch. She works during Atlanta United and Falcons games, and worked for the Super Bowl on Feb. 3. Ms. McCullough also enjoys working at Mercedes Benz for concerts, including the most recent Beyoncé and Jay-Z concert, Taylor Swift, Ed Sheeran, and others. Ms. McCullough has created a hobby out of making candles, jewelry and shea butter, which she gives to family and friends.

Mrs. Rodriguez grew up in El Salvador, with a big family on both her mother and father’s sides. In March, she will celebrate her one-year anniversary at Pace, and she enjoys getting to know students as well as doing different types of jobs each day. In El Salvador, she attended Romero Albergue High School, and after high school she took a job at a hotel in housekeeping. A few years later, she moved to the U.S., where she had her two daughters, 7-year-old Janet, and Paola, who is 14.

She enjoys giving back to the community, and she and Ms. McCullough were Christmas angels to children in Vine City this past December. In her free time, she enjoys medical dramas. According to Mrs. Rodriguez, she really likes working at Pace. She can be seen with her daughters watching and supporting Pace students at football, volleyball and basketball games, and other athletic events.

For these staff members, going the extra mile in their work is instinctual. Pace Director of Maintenance Robert Wood said that they regularly help students and do extra work without being asked, such as waxing floors and attending to small details. “They actually do [something extra] all the time when we’re not here,” said Mr. Wood. “They worked all Christmas break and New Year’s break.” Ms. McCullough confirmed this, stating that she tries to go above and beyond every day.

Described as the best workers Mr. Wood has seen in 16 years, they are essential to keep Pace going, according to Mr. Wood. “Could you imagine this place without them?” he questioned. “It would be chaos.”