Kalissa Greene Sets Herself Up as Top 16s Setter 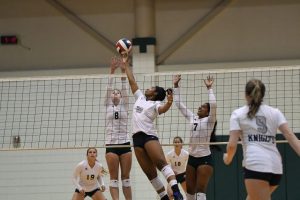 Greene has played varsity volleyball her freshman and sophomore years at Pace, and was an integral part of the team’s back-to-back state championships in 2017 and 2018.

Varsity Volleyball Head Coach Anna Bush gets to coach Greene and watch her grow as a player and as a person. “Kalissa being named one of the top setters in the country, it’s very deserving,” she said. “Her intelligence and knowing when to set a certain player and knowing when she can attack and when she just needs to keep things simple, she understands all of that. And that’s something that you really can’t coach.”

“Not only is Kalissa an incredible player but she is also a great person,” Coach Bush continued. “She is one of those kids that if she sits at the table, everybody wants to sit next to her.”

Greene plays for A5 Volleyball Club, one of the top five volleyball clubs in the country. She is constantly in the gym, whether she is working on technique or strength conditioning. Even with all the accomplishments and praise, Greene says she still “plan[s] on working harder and having an even better season this year.”