How Religious is Pace? 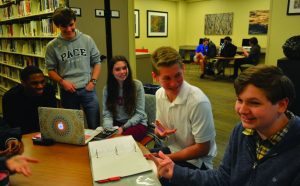 Religion, or lack thereof, is hardly emphasized in the upper school. As a non-denominational private school, Pace does not engage in any religious rituals except for small prayers during convocation, honors day and baccalaureate. Besides Jewish Students Club and Young Life, religious group announcements during morning assembly are frowned upon.

Without a religious focus, Pace is primed for enhanced ethnic diversity. So, what is the breakdown of the religious landscape in the Upper School? A recent Knightly News survey, with about a quarter of the student body responding, reveals that 49% of students were raised Protestant, 24% Catholic, 20% Jewish and 7% “other” (Hindu, Buddhist, Bangladeshi, Muslim, Atheist).

Though that data is not completely accurate without more respondents, interesting trends can still be identified in generational discrepancies across religious sects. 20% of students say they have more “differing” beliefs from their parents. Though a clear minority, this number is sustainable over time, and that difference almost always trends towards increased secularism.

According to Pew Research, 43% of American adults under age 40 say religion is very important to them, while 60% of adults ages 40 and over say the same. That 17% discrepancy resembles the 20 percent change in belief between Pace students and their parents. This same resemblance does not exist in the trend of total atheism.

A 2014 survey conducted on 15,738 Americans by the Austin Institute for the Study of Family and Culture found that 13.2% called themselves atheist or agnostic. At Pace, though, that number is much higher, with 23% of students saying they “do not believe in God or a higher power.” To put Pace’s seemingly high atheism rate into perspective, China’s population is 47% atheist with 30% more of the population saying they are not religious (2012 Gallup poll). Pace’s numbers fall more in line with Europe’s, where an equal percentage of the population are non-believers.

More intriguing still is the difference in religiosity between Jews and Christians at Pace. Those who were raised Christian produced a 13% atheism rate. Catholic responders hold one extreme, with 96% of students agreeing with their parents on religion, and a full 100% believing in God. Protestants seem to be the most fluctuating students, with 29% differing from their parents in their beliefs.

So where are those extra 10 points of atheism coming from? The Jewish students. Students with Jewish parents posted nearly a 50% atheist clip. Surprisingly, 87% of Jews hold similar religious beliefs as their parents, highlighting the modern wave of “cultural Judaism” which contrasts God-based Judaism.

According to Israeli publication Haaretz, Judaism is the “least religious” sect. A 2017 Pew research study found that 89% of American Jews believe in God, indicating the Jewish non-believer rate at Pace is the most irregular statistic.