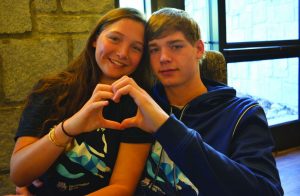 Knightly News: Charlie, Luisa, thanks for sitting down with me.

KN: Let’s get into it, shall we? How long have you guys been dating?

LW: [noticeably perturbed] Eight months tomorrow. Charlie, if you’re going to be like that, then we aren’t going to do this. He knows it’s eight months.

KN: Oh, happy monthaversary! How did you guys first meet?

LW: We have been at Pace together since fourth grade, but we didn’t talk to each other ‘til junior prom. [turns to Charlie] You’re like a completely different person now.

CK: Yeah, she wouldn’t talk to me for years.

LW: No, he wouldn’t talk to me. He was scared of me and wouldn’t say hi.

KN: OK, let’s agree that you both wouldn’t talk to each other. So, why did you want to start dating?

LW: He was nice to me. He’s like the nicest guy and he’s handsome.

LW: We both swam and we could connect on that. I respect him for his dedication. I think it’s hot because he always wins races.

KN: How is being on the swim team as a couple?

LW: It’s lit. I always watch him and count his races. We just talk to each other. He comes over and claps for me as I finish my races.

CK: You know, it’s good, because usually, swimming is pretty boring, but it gives me someone to talk to.

KN: That’s sweet. Now let’s get a little deeper. When did you fall in love?

LW: I remember the exact moment. It was a month after we started dating. It was when he said he said he liked me for me, and not because of other things or just using me.

CK: Just kinda happened you know, it was just gradual. I was just thinking about it that day and was like, yeah.

KN: OK, so what’s your favorite trait about each other, like character trait?

CK: She loves me and gives me attention.

KN: OK, Charlie, we will give you another chance at that one later. What was your first date like, and how did you ask her out?

CK: We went to Storico Fresco. I didn’t ask her out. We just started dating, kind of, then we were like, oh, we should go to dinner. Kayla Ross’ and Joelle Zelony’s moms were next to us.

LW: [To Charlie] Do you remember what you ordered?

CK: I think it was just a salad. I would just stop eating and look at her eat and she’d get really uncomfortable.

LW: I guess. I’m not as worried about what I do around him now than I used to be. [in a high-pitched voice] Because he’s my best friend! [kisses him on cheek]

KN: OK, then, which was your favorite date?

CK: We don’t go on that many dates. Like, eating dates?

KN: Why was it your favorite?

CK: Cuz, you know, I think we bonded very well. It’s like her favorite pizza place, and she liked the food. There was a guy behind some glass staring at me, so we left.

LW: Mine is either when we went to Bell Street Burrito, or for our six month anniversary we went to Eclipse di Luna. I was mad at him because he was supposed to reserve Storico Fresco and he forgot, but we had a good dinner. It hurt our stomachs so bad after.

KN: Why was it your favorite even though it hurt?

LW: We were having good conversation, just getting weak (at each other).

CK: Oh, yeah, and those people next to us were on a blind date.

KN: Alright, what did you guys get each other for Christmas?

LW: He got me a True Grit and a Hydro Flask filled with (my favorite candy) Now and Laters.

LW: I got him a Patagonia sweatshirt…

KN: Before we leave, let’s play fast facts. Give me: most attractive feature, shoe size, birth date of your significant other. Go!

LW: Smile and laugh, 12, April 19th. My grandpa likes to talk about how Charlie has smaller feet than him. It’s their little competition.

LW: [To Charlie] I’m so mad at you. Find out your favorite trait about me. It hurts my feelings.

LW: Better than his first answer.

KN: Nailed it, Kaye. Thanks for talking to me, guys.