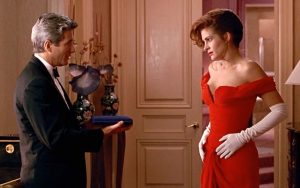 Valentine’s Day is the perfect time to revisit your favorite romantic comedies, or enjoy a classic you’ve not seen before. Below are a few favorites:

“Crazy Stupid Love” is more comedy than romance, but with such a stacked cast, there’s no way you can’t laugh. Steve Carell’s character, Cal Weaver, becomes a newly single man as he splits up with his wife Emily, played by Julianne Moore. As he reenters the dating scene, he enlists the help of womanizer Jacob Palmer, played by Ryan Gosling. Through the many twists and turns, more stars like Emma Stone, Analeigh Tipton, and even Joey King, make this movie the funny and wildly entertaining movie that it is.

With the exposure from her new movie “Bird Box,” Sandra Bullock has gained increased attention in the celebrity world, but before she was Malorie Hayes, she was Margaret Tate, a driven editor-in-chief in “The Proposal.“ The 2009 love story springs from an arranged agreement rather than an emotional connection. In order to avoid deportation to Canada, she insists that her employee, Andrew Paxton played by Ryan Reynolds, marry her. However, as they take a trip to visit Andrew’s family in Alaska, they both discover their attraction to one another. Betty White’s performance as Andrew’s lovable, raunchy grandma is enough to watch the movie alone.

Whether you are a fan of Grey’s Anatomy and love Patrick Dempsey or not, “Can’t Buy Me Love,” released in 1987, is a timeless rom com. “Can’t Buy Me Love” is an ’80s romantic comedy starring teenaged Dempsey who pays a popular girl to date him. In exchange for a one-month fake relationship with Cindy, played by Amanda Peterson, Dempsey’s character Ronald pays Cindy with his lawn-mowing money so she can buy a $1,000 suede suit. Ronald becomes a materialistic egomaniac who needs to learn that popularity is not all it’s made out to be.

“10 Things I Hate About You,” released in 1999, is a teenage love story set in high school. But what makes it a timeless rom com is the mature performances from Heath Ledger as Patrick Verona and Julia Stiles as Kat Stratford. Kat, an angsty teenage girl who doesn’t pay attention to societal expectations, is set up with Patrick and that’s when the drama unfolds. If anything, it’s worth a watch just for the iconic public display of affection on a football field to the tune of Frankie Valli’s “Can’t Take My Eyes Off of You.”

Matthew McConaughey and Kate Hudson share a special chemistry in their movie, “How to Lose a Guy in 10 Days.” Released in 2003, this rom com is a witty movie with a bunch of playful tricks and deception where McConaughey and Hudson perfectly portray their flirtatious roles. Hudson plays a writer at a women’s magazine who is struggling to write an article when she comes upon the idea to get a man to break up with her after only 10 days by using “what not to do” girlfriend tactics.

In contrast, McConaughey’s character Benjamin Barry, trying to prove he can make any woman fall in love with him, ends up dating Hudson’s character, Andie Anderson and repeatedly resists the urge to break up with her. With missions that totally oppose one another, the two drive each other crazy until they ultimately fall in love.

Julia Roberts steals the show in the rom com classic “Pretty Woman.” In the 1990 rags-to-riches story, Roberts plays Vivian Ward, a sex worker who struggles to separate her work life and her personal life. Richard Gere, who plays Edward Lewis, is a wealthy, successful businessman who could have any woman he wants, yet stays committed to Ward. Through their blooming relationship, Ward makes you laugh along with her, sympathize with her, and cheer for her, especially in the iconic scene when she is questioned by a snoopy shop assistant who doesn’t take her seriously because of how she’s dressed.