Despite Controversy, PDC Can Be Fun 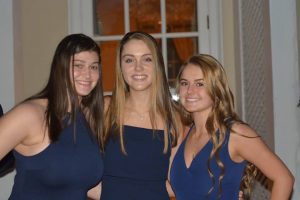 The annual Pre-Debutante Cotillion (PDC) is a formal dance in which students from mostly Buckhead schools come together to eat, dance and enjoy the night. This event has been an Atlanta tradition for 46 years and shows no signs of slowing down. PDC dances are held for each of the four grades. As the girls are invited to their respective grade’s dance, they can ask a boy from any grade to be their date.

From my recollection as a ninth grader, the freshman PDC dance was one of the major events of the year. However, stress surrounding the event boiled up among the class. As the night of the dance approached, the girls experienced most of the anxiety, as they decided who their date would be and how they would ask them, what dress and shoes they would wear, and planned for nail and hair appointments.

Because there are very few formal dances in middle school, most freshmen had little experience with this kind of event and ended up over-hyping the whole thing. However, as years pass and students gain some experience with what PDC is like, the whole event becomes less and less meaningful. The dances are quite fun, but the history of the Pre-Debutante Cotillion generates some controversy.

The tradition of the debutante ball is a custom that started as early as the 1600s, as young girls of noble birth were presented to the court for the first time as women eligible for marriage, showing them off to the king and queen of the day. These extravagant cotillion balls are continued in some form today in the United States but have become less significant internationally.

The idea of the pre-debutante cotillion was introduced to Atlanta as a way to prepare interested high school girls for their eventual debutante season in college. And while there are some key differences between the PDC dances and the actual debutante balls, similarities include the costs involved with these events and the atmosphere of snobbishness that comes with them.

Since the original cotillion balls were for the noble-born members of high society, it only makes sense that these current balls still embody a sense of upper-class pretension. This tone has carried over to the PDC dances, as invitations to these dances are sent out to an exclusive group of high school girls. Usually, only girls that attend a private school in the heart of Buckhead receive invitations, while girls from public schools are left out.

Similar to how debutante balls are a huge expense for the family of the deb and can cost thousands of dollars, the PDC dances are also expensive for the girls. They are compelled to pay a fee for attending for both themselves and their dates, which can cost them hundreds of dollars, adding to the costs of buying a dress and shoes, and hair appointments.

But while the idea of a pre-debutante cotillion conveys the notion of a slightly archaic ceremony, the dances themselves are fun ways to socialize with people in your grade from different private schools. There are very few opportunities, other than PDC, in which students from so many different schools meet and converse, which is a positive. While it is worth having a conversation about the future of PDC, for now, just enjoy the food and music, and dance.