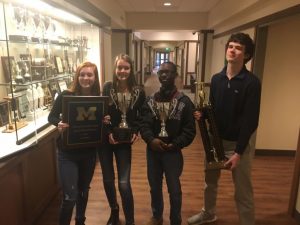 While often overlooked, the debate team is historically the winningest team in Pace history, having won 39 of the past 47 state titles. Despite this impressive record, obtaining another first place win at state this year will be more difficult than in recent history.

Debaters competed in almost a dozen different tournaments first semester, including tournaments as far away as Chicago and Dallas. The competition at these tournaments was intense, and the outcomes were not what the debaters had hoped for.

“We had a disappointing start to the season,” said sophomore policy debater Madison Martin. Martin and her partner, fellow sophomore Ashley Myers, made the transition from novice level to varsity this season. They found it hard to manage this change in difficulty at state competitions. “The varsity competition is definitely more challenging this year, and it’s been tough,” agreed Myers.

Meanwhile, debaters who went to national competitions wrestled with the various styles of debate. “The argument types and the speed are very different,” said sophomore Dylan Kaminski. “At the national level, there’s a focus on speaking as quickly as possible. At the state level, there’s more focus on presentation quality. The national level is definitely more challenging, and our team struggled because of it.”

Although the state competition is one of the most important debate events of the year, debate requires year-long dedication. One way debaters prepare for competition is through a year-round class. “It can be stressful because most students get a break in the middle of the day in an art class, but we have another class,” said Martin. “But we need it to prepare, whether that’s by researching or debating against each other.”

In addition to debate class, debaters have weekly practices and often attend camps over the summer to further hone their skills. “Debate camp is valuable because of the experiences and lectures you get, but also because it’s a great opportunity to interact with judges and coaches,” said senior Tyler Henderson, who attended camp at the University of Michigan over the summer with fellow seniors Ben Nottingham and Kirk Spinelli.

The Pace debate team competes in two types of debates: Lincoln-Douglas (LD), in which individuals compete, and public policy, where debaters compete as teams of two. Public policy debaters debate the same topic year-round, but they must further sharpen and work on their arguments for both sides of the issue for each tournament. Meanwhile, Lincoln-Douglas debaters receive a new topic every month, so they must create new arguments.

Although LD and public policy both fall under the umbrella of debate, there are many differences between them. On one hand, this can make it more difficult for the team to prepare for competitions. “Since we have both LD debaters and policy debaters, the time and resources are split. We can’t all get ready together,” said Kaminski.

On the other hand, it makes the team more diverse and interesting. “Having Lincoln-Douglas debaters for the first time in a decade is one of the exciting things about the debate program this year,” said J.B. Fuqua Chair of Speech and Debate, Shuntá Jordan.

Debate can be both mentally and emotionally challenging. As with any other competitive sport, debaters put hours of work into each competition, and losses are disappointing. “You can get really down after a tough loss, especially when your coaches are disappointed in you,” said Nottingham. The team dynamic can be another stressful factor. “Sometimes there are communication and interpersonal issues,” said Henderson.

While Ms. Jordan agrees that debate can be a demanding time and mental commitment, she also thinks that students learn to manage the stress. “The most important thing here at Pace is understanding the importance of the history of the program, and knowing that we have a long-standing history of excellence in debate,” she said. “Debate can be time-consuming, but if you balance your time well, it isn’t as difficult as one would think.”

However, the state tournament won’t be easy. The debaters will be facing their toughest competition yet. “There are lots of excellent seniors in the pool this year, so it’ll definitely be a challenge,” said Henderson. This will also be the last state tournament for Nottingham and Henderson, who are partners and are currently seeded third and fourth in the state.

With a slow start to the season, Ms. Jordan believes that there is a long way to go in terms of preparation needed for the state competition on Feb. 22. “Although they could have done better, they’ve done fair so far,” she said. “It hasn’t been what it could be. Our chances would be better if we did more work and were more focused. I’m waiting myself to see how we do.”

Kaminski agreed, saying that “there’s more work that needs to be done.” Although the future performance of this year’s debate team is uncertain, the debaters remain optimistic for a positive outcome. “We got third last year, so hopefully this year we can get second or first,” said Nottingham.