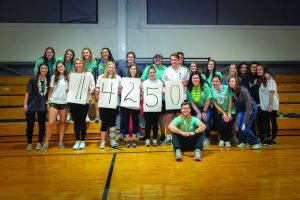 For the second year in a row, Boyd gym was transformed into a neon lit, balloon filled party room, as this past Sunday was the second annual Miracle Knights dance marathon at Pace Academy. Miracle Knights was first formed as a club last year and has grown in support in both numbers of club members and numbers of attendees to the dance.

The event at Pace was from 3-7 p.m., and it was a non-stop dancing party with the occasional game, such as neon volleyball. The Pace dance marathon is a local variation of a national event that happens in cities throughout the country. Some of these marathons are much longer, with some being 40-hour events, but all benefit the same cause.

These marathons were created so kids can have fun and raise money for the Children’s Miracle Network Hospitals, supporting families with children battling all forms of cancer. The dance marathon is a creative way to donate, as contributors get to dance and interact with the families they are helping, adding a personal touch to the experience. All profits that the dances make go directly to the hospitals, with $38,060,679 raised in 2017 and 11 different college campuses raising over $1 million annually.

At Pace, the Miracle Knights club is led by senior Lily Wagoner, but it has members and leaders from all grades. “It’s awesome to me to see all grades come together and create an event for a cause that’s as important as stopping childhood cancer,” said Wagoner. “I was really happy about how the marathon went because of all the hard work that went into preparing and executing it.”

To plan for this, the club members had to book a DJ, plan games, get props, raise money, order catering, and most of all spread the word about the marathon. “There were many meetings and excruciating planning that went into the event, which resulted in a lot of stress, but in the end we were all really happy with how the dance went,” said junior Tanner Walton.

The dance got rave reviews. “It was a lot of fun to be at, and to be able to participate in a cause like that makes it even better,” said junior Spencyr Aaronson. With all the hard work and planning, the 2019 Pace dance marathon went off without a hitch, and was emblematic of the national marathons and the cause that they support. The dance raised a total of $4,250 for Children’s Healthcare of Atlanta, with the Class of 2020 donating $1,800, the Class of 2019 donating $1,649, the Class of 2021 donating $921 and the Class of 2022 donating $120. “You can expect Dance Marathon back next year,” said Walton.