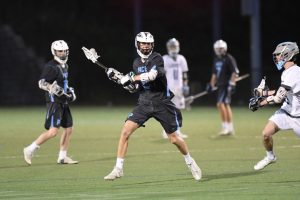 Following a successful season where the team finished with a record of 13-6, including big wins against St. Pius X, Whitefield and Lovett, the 2019 lacrosse Knights look to develop a new crop of players. This year’s team will face the daunting task of filling the shoes of multiple key contributors from last year’s team, including All-American Ryan Hofstetter ‘18 and All-State Honorable Mention Joseph Adams ‘18.

Eleventh grade dean Grady Stevens returns for his fifth season as head coach of the varsity program. He is joined by ninth grade dean Ben Ewing, 10th grade chemistry teacher Matthew Smentek and goalie coach Nick Verrelli, as well as Bryan Cole and Shayne Jackson, members of the National League Lacrosse team Georgia Swarm. Hailing from Maryland University, Cole was selected with the 4th overall pick in the 2016 NLL Draft, while Jackson, an alumnus of Limestone College, led the Swarm during the 2017-18 season with 52 assists on the season.

One of the strengths of this year’s team is the relationship between the seniors, who have been working with one another as they figure out how to become leaders on and off of the field. “I think the senior leadership has been great,” said Coach Stevens. “There’s so many of the seniors that are playing, and each guy has been playing their role well.” Every senior has played since freshman year, allowing for a natural chemistry to take shape as the years progressed.

Senior captain Sam Assaf, currently committed to play lacrosse at Amherst College, looks forward to being able to lead a relatively inexperienced team and hopes to build a strong bond between players. “Our defense has played together for a few years now, so we will look to build off of that strong foundation in order to strengthen the rest of the team throughout the course of the season,” said Assaf.

The offensive side of the ball features new faces, including sophomores Steven Morrisroe and Evan Karetsos, both of whom have been working hard in the offseason in order to be ready when their numbers are called. “Personally, I’ve worked hard to become a more versatile offensive threat to help alleviate some of the pressure off of our midfielders,” said Karetsos. This team will need multiple underclassmen to take a big step forward this year if they hope to be in contention come May.

The team will look to capitalize on its strengths defensively and at the faceoff X, where senior and Sewanee lacrosse commit Charlie Warren will look to build off of his junior campaign, one in which he finished with an All-State Honorable Mention. Success in the faceoff game leads to more offensive possessions and in turn more chances to score.

The Knights begin their season on Feb. 12 at 7 p.m., a home game against AAAAA classification Kell High School.