Basketball Excels in Season of “Firsts” 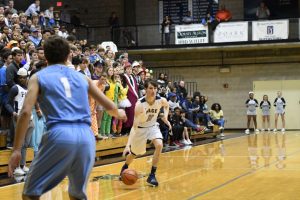 Junior Ben Crawford drives into the paint against rival Lovett. Ben is one of the many young contributors that have helped the team thrive. Photo: Fred Assaf

This basketball season marks some new beginnings for the Pace Knights. This is the first season without 6’7 forward Isaiah Kelly, who now plays for Yale University as a freshman. Kelly and Wendell Carter Jr., who graduated in 2017 and is now a Chicago Bull, were both key to Pace’s dominance in recent years.

This year also is the maiden season for new head boys basketball coach Sharman White. Coach White has an extensive list of coaching accolades, being named National High School Coach of the year by the NHCSA in 2016 and winning the 2013-2014 USA Today Coach of the Year award. In addition, he helps coach some of the best players in the country as a member of the USA Basketball coaching staff.

“With the arrival of Coach White, the entire culture around the team changed,” said junior Sam Adams. “The team has an added desire to work even harder and to succeed because of what he brings to the table and how great of a coach he is. I think that this is evident in our play, as, even though we have only one senior, we can continue to play and compete at a high level.”

Myles Todd is the lone senior, and one of only two players (along with junior Reign Watkins) who remain from the team that won back-to-back state championships in 2016 and 2017. With so many younger players, the team’s dynamic is starting from scratch.

However, Todd shoulders the responsibility of leadership extremely well. “I understand that I am the only senior on the team, and a lot of responsibility falls to me as I have the most experience,” said Todd. “That is extremely important to me, because understanding what to do and when to do it is how you win games.”

On the court, however, the team is led by underclassmen. Sophomore Madison Durr is new to Pace but has stepped right into his role on the varsity team, leading a lot of the offensive plays. Aside him is sophomore and big man Cole Middleton. Middleton was on the team as a freshman, but he has really stepped up this season, controlling the paint for the Knights and allowing other players to flourish around him. Lately Middleton has been sidelined with a foot injury, and Watkins and sophomore Justin Johnson have seamlessly involved themselves in the offense more often.

“A lot of young players have stepped up this season, and it has been huge for the success of the team,” said junior Ben Crawford. “Even though they may lack the experience of Myles, they still contribute to and influence the game in major ways.”

Whatever the formula is for the Knights, it’s working. In his first year with the team, Coach White has led the boys to a 18-7 record and a huge win over Cedar Grove in region play.

Durr, Watkins and freshman Josh Reed were named to the 5-AAA All Region Team. With a 9-3 region record, Pace began the region tournament as second seed behind Cedar Grove. After defeating Towers High School and Redan High in the first two rounds, the Knights face Cedar Grove tonight at 8:30 p.m. in the Inman Center for the region championship final.