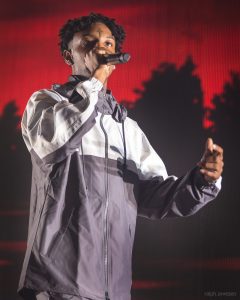 Shayaa Bin Abraham-Joseph, known by the stage name 21 Savage, released his sophomore album “i am > i was” on Dec. 21, 2018, a followup to his debut “Issa Album” from July 2017. In collaboration with well known producers such as Metro Boomin, Southside, Wheezy and FKi 1st, 21 Savage crafts an album that builds off of his previous reputation as a man not to be messed with, while also disclosing a more impassioned artist, less familiar to the public.

Although spending over a year between album releases, 21 Savage never shied away from the spotlight. Hailing from Dekalb County, Savage’s 2018 consisted mostly of guest verses on commercially successful albums such as Metro Boomin’s “NOT ALL HEROES WEAR CAPES,” Quavo’s solo project “QUAVO HUNCHO,” and Meek Mill’s most recent release, “Championships.”

“i am > i was” features guest verses from high profile artists including J. Cole, Childish Gambino, Post Malone, Lil Baby and others. It debuted at No. 1 on the Billboard Top 200 chart, Savage’s first No. 1 album of his career, and stayed there for another week before being overtaken by A Boogie wit da Hoodie’s “Hoodie SZN.”

Often categorized as a monotonous trap rapper, Savage builds off of his solid 2018 features with his most sonically diverse release yet, rebranding himself as a man of more musical assortment than what may be expected on the surface. The hard, murderous exterior displayed on his breakout EP “Savage Mode” has slowly disintegrated over the past few years to show a man that has had to battle adversity to get to where he is today. And, as the title of this album indicates, he is a better man for it.

Savage divides his album into two broad categories: life before becoming famous, and life after becoming famous. Songs such as “a lot” featuring J. Cole and “letter 2 my momma” describe some of the hardships he faced being raised by a single mother with six sisters and four brothers, one of whom was gunned down in a drug deal gone wrong.

Others like the Post Malone-assisted “all my friends” and “monster” featuring Childish Gambino dive into the struggles that come with the meteoric rise to stardom, such as the moral corruption money can cause and the difficulty of deciphering who he can trust and who is backing him for their own personal benefit.

Although Savage allows for a closer look into his inner thoughts, he still dedicates time to the ruthless attitude that he is known for. “gun smoke” and “asmr” give Savage the chance to retake his crown as one of the most malicious rappers in the game at the moment, and announces that anyone who gets in his way will bear the full consequences.

The latter of these two songs also sees Savage return to his viral whisper-rap style, a technique that was instantly memed after his first attempt on the song “Don’t Come Out the House” from “NOT ALL HEROES WEAR CAPES.” “can’t leave without it” with the inseparable duo of Gunna and Lil Baby see the three taking turns flexing everything from guns to cars over a menacing instrumental by CuBeatz.

Varying vocal inflections and flows, as well as a wider variety of material, all combine to create 21 Savage’s most complete project to date. Savage stands out from a crop of Atlanta rappers who focus on the material aspects of rap. He’s a man who has the capacity to shift his focus to a more personal and emotional subject, while still being able to turn around and flex on anyone who challenges him.