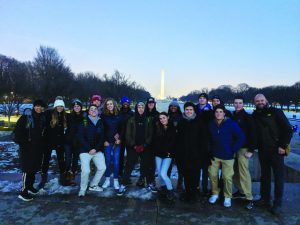 Finding the right college is often regarded as a stressful and challenging undertaking, as the college process takes time, patience and a lot of research. One of the reasons students prefer independent high schools over public schools is that schools like Pace can provide extensive resources to alleviate some of the college-related stress.

One such resource is the trips the college office plans for students to tour several colleges and universities in a short period of time. From Jan. 17-21, 16 Pace students flew to Washington, D.C. with college counselor Ben Wescott and history teacher Caitlin Terry to look at eight colleges in the mid-Atlantic region.

On Jan. 18, students toured Georgetown University, George Washington University and Howard University. “Georgetown was really pretty and I was surprised by how invested students are in clubs there,” said junior Maya Kaplan. “I don’t really think it was for me, though, because of its small size and Catholic focus.” On the other hand, junior Kennedy Tate’s visit to Georgetown reaffirmed her interest in the school. Tate was also impressed by Howard’s inclusive campus and friendly environment.

After an intense first day of touring colleges, the students enjoyed a brief visit to the Martin Luther King Jr. Memorial at the National Mall. Afterward, students were given three hours of freedom in the heart of Georgetown’s M Street for dinner, shopping and dessert.

Students woke up early on the morning of Jan. 19 to board a bus headed from D.C. to the University of Maryland (UMD) in College Park. Led by a UMD Class of 2018 graduate, students walked across a snow-covered campus in awe of the state school’s immense size. “I found Maryland’s location to be very beneficial to its students, as it’s so close to D.C. in a way that the college experience would be a mix of both urban and suburban life,” said sophomore Claire Howell. The group later ate lunch at a variety of restaurants in downtown College Park.

In the afternoon, Mrs. Terry led students on a tour of her alma mater, the University of Virginia. Despite the rain and wintery weather, students seemed impressed with the school. “It was cool to hear about some of UVA’s fun student traditions from a Pace teacher,” said junior Will Stratton. “The campus’ appeal is also really obvious.” Students also enjoyed dinner at one of the various Charlottesville shopping centers that Mrs. Terry, having grown up in Charlottesville, frequented in her childhood.

On the long evening commute from Charlottesville to Roanoke, the Pace bus, full of tired students, broke down on the outskirts of Waynesboro, Virginia. Bus driver Aman Heard was frustrated with the engine’s overheating on such a chilly night. With time to kill in the parking lot of a gas station, students bonded and joked with Mrs. Terry and Mr. Wescott. An hour and a half later, a second bus came to the rescue and drove the Pace group the remainder of the way to Roanoke. Students arrived to their hotel at around 12:15 a.m. on Jan. 20.

That morning, students toured and ate lunch at Mr. Wescott’s alma-mater, Roanoke College, in Salem, Virginia. “It was a lovely school, but too small for me,” said junior Emma Shelton. The Roanoke College student game room did, however, become an integral part of the Pace trip, as junior Davis Futrell defeated classmate Kaplan in a game of ping-pong.

That afternoon, students travelled to Washington and Lee University in Lexington, Virginia. Students reunited with Pace Class of 2018 graduate Jack Douglass who is a current freshman at W&L. “Washington and Lee definitely changed my perception of small schools,” said sophomore Lily Cummings. “I could maybe see myself there.”

The next day, students toured the University of Richmond, a smaller-sized school in Virginia’s capital city. All 16 students commented on Richmond’s tasty dining hall lunch. “It was truly great food,” said junior Matthew Quintana. “The pasta was excellent.”

Students flew back to Atlanta from the Richmond airport, and arrived home with a better understanding of what they want from a college or university. “After seeing a bunch of types of schools, I now know for sure I want a large, state school experience,” said Futrell. Students have another opportunity to tour colleges on a long weekend trip to the Carolinas Feb. 15-18.