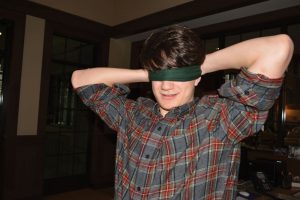 Social media has blown up with the familiar meme of Hollywood actress Sandra Bullock staring into the distance with a blindfold covering her face. The viral photo is taken from her new movie, “Bird Box,” a Netflix original. The movie gained a record-breaking number of views in the first seven days of its release on Netflix, with 45 million accounts streaming the thriller.

The question remains, however, why is this film so popular? Many have considered it an ordinary production of a protagonist’s journey to safety, but it is the hidden meanings that may account for Bird Box’s success.

The movie, directed by Susanne Bier, creates a mysterious force or “spirit” that when looked at, makes the majority of California’s population want to commit suicide. Malorie, portrayed by Bullock, tries to escape the terrifying, unseen spirit while bringing her kids along on the journey to safety.

“Bird Box” has received a lot of praise for its themes of parenting, blind faith and the dangers of social media. At the same time, the film has generated a significant amount of backlash for portraying those with a mental illness as the “evil” ones in the film.

The movie focuses strongly on the fear of becoming a parent and to what extent Malorie would go to save her kids. SPOILERS AHEAD: In the movie, Malorie is faced with deciding which of her children she removes the blindfold from so that they can help guide the family down the river. Without a blindfold, that child would be taking the chance of being inflicted by the spirit.

However, Malorie is unable to make such a difficult decision. She decides nobody will take their blindfold off, so she and the children will rely on blind faith. The idea of blind faith means taking a risk despite not knowing the outcome. Malorie had to rely on hope despite the outcome when she ventured down the dangerous rapids. Bullock’s journey down the rocky river to find safety reflects a parent’s journey of parenthood and how saving your child even at the cost of your own life is necessary.

Social media ties the film together as it signifies the power of pain and self harm through obsession with a screen as represented by the spirits throughout the movie. The movie begins with Malorie painting a picture while her sister explains that it looks lonely even though the people in the painting are all close together. Malorie offers an alternative response as she says, “It’s really about people’s inability to connect. The loneliness is just incidental.”

The early dialogue could suggest that people struggle to form relationships because they are hiding behind a screen. The monsters or evil spirits in the movie represent the idea of social media and how it is killing humanity, forcing people to be someone they are not. The idea of being blindfolded in order to refrain from the danger of the spirits exemplifies how people can be safe by staying away from screens and be true to themselves rather than trying to be someone else. The spirits could be a symbol for cyberbullying, found all over social media outlets, and how they cause self harm to those who are diagnosed as having the “disease.”

Although “Bird Box” has aimed to convey beneficial messages, the film has received strong criticism for depicting people with mental illnesses as the “bad guys” of the movie. Throughout the movie the viewer is reminded that the only people who can look at the spirits without driving themselves to commit suicide are those diagnosed with a mental illness who try to persuade others to look at the supernatural monsters.

Critics said that instead of conveying healthy messages, it villainizes people diagnosed with a mental illness. The makers of “Bird Box” most likely did not intentionally mean to diminish people with mental illnesses. But does that excuse them for their carelessness?

The film itself was a jaw dropping thriller. When I paid attention to specific metaphors and phrases I realized the creators’ subtle messaging on the major themes. However, while it attempts to convey these distinct themes, it can also be offensive to those with mental illnesses.

Originally watching the movie I did not perceive it that way, but rethinking it and searching for evidence I see it differently. To deliberately denounce people with a mental illness as it seems the film makers did is very disheartening. After reflection it’s clear that the diminishment of people with mental illness outweighs the positive messaging throughout.