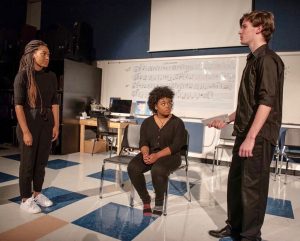 In the lull between the fall musical and the spring musical, the Pace upper school drama department has been hard at work on the Winter Showcase. The production opens tonight in the FAC at 7 p.m. and is free and open to the public. The show will also be performed on Saturday, Jan. 26 at 7 p.m.

The Winter Showcase, a Pace theatre tradition, is an opportunity for students to perform modern and self-directed scenes in front of a smaller audience. According to Upper School Visual & Performing Arts Chairperson Sean Bryan, there will be about 10-12 scenes, occurring in different rooms, and about 45 students are participating. The audience moves from room to room to see all of the scenes.

One of the things that makes the Winter Showcase special is its informal and more intimate setting, which means that students can experiment more with their material and can even write and direct their own scenes.

“Everything has its own spotlight,” said Mr. Bryan. “Everything is fun and unique.” Audiences should look out for a couple of scenes in particular. “[Seniors] Emily [Schmidt] and Abby [Ray’s] ‘Oh Hello’ is very funny, and it’s one of the first performances,” he said. “[Senior] Ania Briscoe has written and directed a piece, and her writing is notable. [Junior] Kellee Kindle is also working on material that is very special to her.”

This year, Mr. Bryan partnered for the first time with Serenbe Playhouse Director of Education Cory Phelps who will be responsible for one of the rooms where students will perform scenes. “We chose the Serenbe Playhouse because of their site specific work,” said Mr. Bryan. “With so many things happening, it’s complicated for one person to handle, so we’re lucky to have him.”

In addition to the two performances this week, the cast will be presenting some of the same scenes from the Showcase at the Georgia Thespian Conference next month, making the Showcase an opportunity for them to test out their new material.