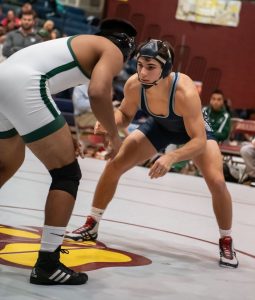 Warren prepares to dominate in a match against an opponent from Westminster. Photo: Laura Inman.

Led by senior and co-captain Charlie Warren, the Pace Academy varsity wrestling team competed at the Prep Slam wrestling tournament hosted by Holy Innocents’ on Jan. 4. With a 27-second pin against an opponent from Cardinal Gibbons High School, Warren reached a personal milestone of 100 victories as a Pace wrestler, making him one of only 11 wrestlers in Pace history to secure 100 career wins.

Having begun his wrestling career in the sixth grade, Warren has only improved as he developed his skills at the high school level. “My older brother Rob encouraged me to try out for the team,” said Warren. “I’ve grown to really appreciate the sport because it helps me to relieve stress.”

Wrestling has not always come easy to Warren, however. He had to dedicate himself and devote much of his time to become the wrestler he is today. “The season is always grueling,” said Warren. “It’s filled with highs and lows but in the end, the camaraderie is what makes or breaks the season.”

After a meet against Westminster, Mill Springs and GAC on Friday, Jan. 18 for senior night, Warren bumped his number of victories past 100 to 106. That number will likely continue to grow with the remaining meets in January and the area, section and state tournaments in February. His next meet with the Pace team is today, Jan. 23, at 5:15 p.m. at Wesleyan.