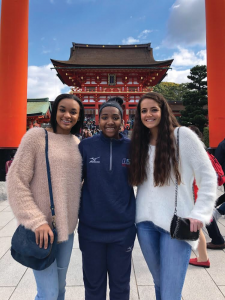 What do you think of when you imagine Japan? Do you imagine sushi, a world of bright lights in Tokyo or even sumo wrestlers? Well, when I think of Japan, I think of volleyball. Over Thanksgiving break I traveled to Japan along with juniors Ada Jane Agolli and Sasha Ratliff. We are all members of Pace Academy’s back-to-back state championship varsity volleyball team and play for A5 Pure Volleyball club year round.

A5 was formed in 2004 to create a different club experience in Georgia, and to raise the level of the sport throughout the South. It is located in Roswell, and is ranked third in the country by Triple Crown Sports for this past season. Based on the club’s performance during the past five years, however, it is ranked No. 2 nationally.

The coaching staff for the trip was lead by Bob Westbrook, one of the founding members of A5. Pace’s own varsity volleyball head coach, Anna Bush, is also a founding member. The coaching staff, which includes Gabe Aramian, Jing Hou (who at one point in his volleyball career was the best setter in the world), Scott Cioffari, Conor Lounsbury and Cassidy Cason, made sure to incorporate life lessons into their coaching of volleyball whenever they could.

We were all hand-picked by the coaching staff to join the international trip team to Japan. The team had 16 players, and with over 500 players in the club, it was a honor to be chosen. The idea of going to a completely foreign country for 11 days invoked a mix of emotions. “I was excited, but fearful of the major differences we would experience,” said Ratliff. It’s that same feeling that I felt while aboard the 15-hour flight to Japan and sleepily awakened to find we still had seven hours left.

“We are excited about the cultural aspect and getting to play Japanese teams and train with Japanese coaches,” said Coach Westbrook before the journey. “It’s a great group of girls and they can’t be more excited to be a part of this great process.”

On the trip, we played five matches and also trained for three days. The competition level on the court was the highest level we have ever faced. We played against Kobe Gakuin University, Hachioji-Jissen High School, Shimokitazawa Seitoku High School, Keio University Team and Bunkyo Gakuin. In addition, we practiced with the Senri Kinran University team. Shimokitazawa Seitoku High School is the best high school volleyball team in Japan. They practice 34 hours a week: seven hours twice a week and four hours on the other five days.

”I was really surprised about how the players there practice so much and how their lives revolve completely around volleyball, as well as how they play professionally right after high school,” said Agolli. Over time, we saw that all of the teams we played ran the exact same defensive system and similar offensive systems.

Our level of play improved each day and we finished our last match with a last set win against Bunkyo Gakuin High School. “Our athletes made steady progress in the face of a challenging schedule as they competed throughout our stay,” said Coach Westbrook.

Off the court, our experiences were life changing. We got to visit Japan landmarks like Osaka Castle,  Fushimi Inari Taisha Shrine and the Itsukushima Shrine. Ratliff’s favorite sightseeing spot was the Shibuya Crossing in Tokyo because of the flooding intersection. The trip was at times tedious, however, with hours of riding in trains every day, and filled with experiences with new foods like chicken gizzards.

For three nights we got the opportunity to stay at the Olympic Training Center in Japan. It is special to know we have now been in the same rooms as some of the top athletes across the world.

After practicing with Keio University, we went out on the town with their players. Keio University is considered the equivalent of an Ivy League school in Japan, and some of their players could speak English perfectly. We created a memorable and unbreakable bond with that team.

My favorite part of the trip was going to Mizuno’s headquarter store, and then meeting some of the head leaders at Mizuno. Before our game, they surprised us with custom made and not-yet-released volleyball shoes. “I really look back and appreciate how the trip was more than volleyball and new shoes,” said Ratliff. “It was about growth and understanding the world around you.”

“Our athletes represented us in the highest possible manner,” said Coach Westbrook. “On the court and off the court, the girls made us proud of their representation of the sport for A5 and the United States.” Every player on our team now has something to take back with them. “I learned a lot about volleyball and how the standards and lifestyles of athletes there is so different than here and I was truly humbled by their welcoming culture,” said Agolli.