Get in the Spirit with Christmas Classics 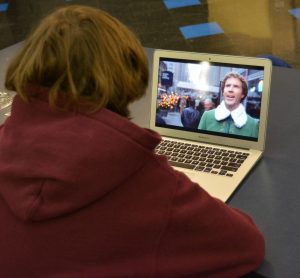 With the holiday season quickly approaching, it is that time of year to throw on some pajamas, whip up some hot chocolate and sit by the fire to watch a Christmas movie. Here are the top five movies to watch this holiday season:

#5 Directed by Larry Roemer, “Rudolph the Red Nosed Reindeer” is a holiday essential. The snowman, voiced by Burl Ives, tells the story of a reindeer who has trouble fitting in because of his shiny, red nose. The 1964 animated movie follows Rudolph’s adventures after he leaves Santa and the other reindeer.

It is a truly uplifting story where Rudolph and the misfit toys he meets along his journey save Christmas and finally feel like they belong. The movie has many great songs including the iconic sing along, “Rudolph the Red Nosed Reindeer.”

#4 Director Robert Zemeckis delivers a classic in “The Polar Express,” an inspiring adventure based on the beloved children’s book by Chris Van Allsburg. When a doubting young boy takes an extraordinary train ride to the North Pole, he embarks on a journey of self-discovery that shows him that the wonder of life never fades for those who believe.

Tom Hanks delivers an excellent performance voicing multiple roles, including the young protagonist, his father and the conductor of the titular train. No movie will get the Christmas spirit flowing like “The Polar Express.”

#3  “Christmas Vacation” follows the story of Clark Griswold, played by legendary comedian Chevy Chase, who wants to have a perfect family Christmas. As a result, Clark pesters his wife and children as he tries to make sure everything is in place, including the tree and house decorations.

However, things quickly go awry. His thick-headed cousin, Eddie, and his family show up unexpectedly and start living in their camper on the Griswold property. The slapstick humor, complemented by the dry humor of Chase, gives the audience many laughs throughout.

#2 The second movie in the “Home Alone” franchise, “Home Alone 2,” has the McCallister family deciding to head to Florida for Christmas. After a young Kevin McCallister, played by actor Macaulay Culkin, loses track of his family at the airport, he mistakenly boards a plane headed for New York City, while the rest of the McCallisters fly to Florida.

Now alone in the Big Apple, Kevin cons his way into a room at the Plaza Hotel and begins to live the dream, ordering room service and hanging in a hotel room all day. But when Kevin discovers that the Sticky Bandits, the same robbers from the first movie, are on the loose, he struggles to stop them from robbing an elderly man’s toy store just before Christmas.

The funny ways Kevin McCallister stops the robbers make for laughs that are hard to forget. Kevin’s experience being alone in New York City is one many are envious of and is a reason this film has become a Christmastime staple.

#1 “Elf” is the essential movie of the holiday season. Starring Will Ferrell, the story is about a young boy who climbs out of his crib and into Santa’s sack on the night of Christmas. When Santa gets back to the North Pole, he tumbles out of the sack, scaring all of Santa’s workshop. They decide to keep him and name him Buddy, because that is the name of the diaper company on the diaper he is wearing.

Viewers see Buddy growing up as a human among elves, a classic Will Ferrell moment. When Buddy grows up, his adoptive elf dad and Santa decide it is time to tell him that he is a human, and that his real dad lives in New York City. Buddy embarks from the North Pole on his adventure to the Big Apple. Upon arriving and exploring the city, he walks around eating gum off the street, congratulating coffee shops that have the “Best Coffee in the World” signs and spinning around in a revolving door until he is sick.

Buddy then continues on his journey to reunite with his biological father. Many notable funny scenes include the snowball fight, the escalator scene and jumping on the tree to put the star up. Some of the best quotes include: “Buddy the Elf, what’s your favorite color?” “We elves try to stick to the four main food groups: candy, candy canes, candy corns and syrup.” “This place reminds me of Santa’s workshop… except it smells like mushrooms and everyone looks like they want to hurt me.”

“Elf” has endless laughs throughout the movie and will be sure to warm any and every viewer’s heart.