Swimming and Diving Kicks Off to Great Start 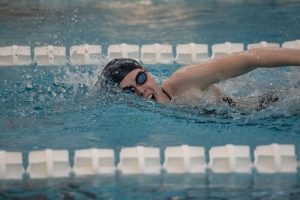 Erin Hood swims in the meet against Loganville on Nov. 15. Photo: Ashford Little

Senior Charlie Kaye also had a standout performance with state qualifying times in the 50 free, 100 butterfly and 100 free. Both teams competed in their second meet of the season at home on Nov. 15 against Loganville High School which both resulted in wins.

John Ague, head coach for both varsity girls and boys, is very proud of how the team performed at their first two meets. “I’d say we are off to a pretty good start,” said Coach Ague. “Charlie and Erin both have some really good opportunities individually and [sophomore] Lizzy Kaye with diving. We have some other people that are nearing state qualifying times and that’s kind of a big part of what we are reaching for all season.”

Coach Ague’s shared his main goal for the season: “I hope that both the boys and girls have an opportunity to improve where they finished last year at the state meet. Based on what I’ve seen so far I think we have the talent to do so.”

Senior Sophia Lochan is one of the team captains. She began swim team in sixth grade but became serious in eighth grade. Lochan swims the 200 individual medley and the 100 breast, however it can change based on the meet. As a captain, she feels it is her duty to help the team bond and form strong relationships with one another. “I feel like it’s my responsibility to keep the team unified and have a bunch of bonding opportunities,” said Lochan. “I’m really excited to see how far the team goes and how many individual state qualifiers we have.”

Charlie Kaye, who joined his first swim team at the age of four, is another captain. At the 2017 GHSA Swimming and Diving Championships, he was the A-AAA State Champion in 100 yard backstroke and the A-AAAAA State Runner-Up in 100 yard freestyle. Kaye sets an example for his teammates during meets as well as during practices.

According to Charlie Kaye, it is his responsibility “to get the team excited before and during meets, and to set a good example of work ethic during practices.” Not only does he feel he has to lead as a captain but he also has this obligation as a senior. “There’s always excitement for senior year,” said Kaye. “We get to lead the team.”

As a new coach this season, science teacher Melody Walter has been working hard to help the team prepare for the season. “I want them to get better in terms of times, but I also really want the team to come together as a cohesive group,” said Dr. Walter. “One of my goals is hopefully at the end of the season everyone will be able to come together as a group not just with fast times but also with supporting each other.”

The next meet for both varsity girls and varsity boys is on Jan. 8 at home against Paideia.