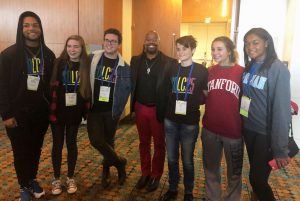 With concerns regarding diversity and inclusion being prevalent in schools across the country, Pace has recently taken a major step toward addressing these problems. From Nov. 28-Dec. 1, six students travelled to Nashville to attend the National Association of Independent Schools’ Student Diversity Leadership Conference (SDLC). This year marked the 25th anniversary of this multiracial, multicultural gathering of independent school student leaders.

Parallel to NAIS’s People of Color Conference that 10 Pace faculty members attended, SDLC creates a space for students to explore challenges regarding social justice. This year’s theme was “Equitable Schools and Inclusive Communities: Harmony, Discord and the Notes in Between,” which encouraged conversation about diversity and inclusion in schools.

The SDLC conference, led by a team of trained adult facilitators, focused on self-reflection, the formation of allies and the building of communities. Students from across the United States were able to speak with strangers and make bonds by learning about experiences different from their own.

With a maximum attendance of six students per school, Director of Diversity and Inclusion Joanne Brown had to be selective in her choice of who would attend. The students who went are all members of the Pace Academy Board of Diversity (PABD), and therefore were perfect candidates for this conference.

Juniors Julia Kelly and Maya Kaplan, both leaders of PABD, attended in hopes of learning more about leadership. Other attendees included sophomores Noah Bennett and Jordan Benjamin, and juniors Paul-Louis Biondi and Lauren O’Sullivan. “In our debrief on the last day of the conference, it really became clear to me that the six people that should have been there were exactly those six students,” said Mrs. Brown.

“I really care about diversity so I wanted to learn as much as I could,” said Kelly. “I believe this opportunity has helped me to learn more about being a better leader.” Both Kelly and Kaplan claim to have taken away skills that they will be able to apply in managing PABD. “In order to become a better ally for everyone, I needed to gain a better understanding of what people are facing,” said Kelly.

In Nashville, the students had the opportunity to listen to numerous speakers from across the country. These speakers explained some of the serious issues that Americans are facing, but also ways that these problems can hopefully be solved. “Also, when we were listening to the speakers, we were allowed to keep some in mind to potentially recruit them to come and speak at Pace,” said Kaplan.

Not only did the students listen to speakers, but they were also able to participate in interactive games. One activity they did was called “Spectrums.” In “Spectrums,” a facilitator read a prompt, and then the students silently moved to different locations in a room that expressed their agreeing, disagreeing or in-between emotions.

In this activity, it was important to remain honest with one’s beliefs, instead of following the majority’s stances. Therefore, people could learn from others and understand where they were coming from. “No one was judgmental,” said Benjamin.

One new experience for many students was the use of affinity group spaces. “In affinity groups, you get to spend a part of the time with people who have your shared identity,” said Mrs. Brown. With these groups, students were able to express their feelings and get affirmation that others were having a similar feeling.

Comparatively, some time was spent with intentionally diverse groups of students. “There was a cross-racial and cross-cultural mix of students in these groups, which is something that is not often reflected in our independent school spaces,” said Mrs. Brown. According to the students, it was interesting to learn about the different stances that people take.

Something that stuck out to the students was how accepting the people were at SDLC. “It was a judgment-free, mature environment where everyone could share their opinions without any backlash, even if someone disagreed,” said Benjamin. The leaders want to create this type of environment, where everyone feels comfortable speaking out, at Pace.

“Sometimes it feels like there is nothing we can do to fix these problems because they just seem so huge,” said Kaplan. However, the six leaders all took something in common away from this conference: Change is possible, and through empowerment and unification, America can reach that goal.