Republican, Democrat Divide Widens While Freedoms Are at Stake 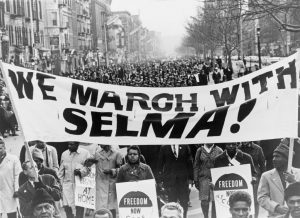 Civil rights activists march from Selma to Montgomery in March 1965 to protest voting rights abuses against African Americans and the shooting death of Jimmy Lee Jackson at the hands of police during earlier non-violent protests. Photo: Wikimedia Commons

In 1955, Rosa Parks was arrested in Montgomery, Alabama for refusing to sit in the back, “colored section,” of a public bus. In 1961, Freedom Riders in Anniston, Alabama, seeking to protest segregated bus terminals, were beaten with clubs and fire-torched by an angry white mob – and then sentenced to jail for their protests.

In 1965, civil rights activist John Lewis was beaten to within an inch of his life in Selma, Alabama for marching in support of equal voting rights. In 1998, Matthew Shepherd was beaten, tortured and left to die in Wyoming because of his sexual orientation. In 2018, students with right-leaning, conservative views claim they have had their feelings hurt.

The writer of this editorial talks about being shunned at Pace for expressing his political views, as well as his fears for our generation becoming more polarized and radical than it already is. The reality is that, regardless of whether it has been on his radar screen, our world has always been polarized and conflicts will arise between groups who will undoubtedly have profound differences of opinion over everything from moral values to economic strategies for our country.

In 2018, conservatives and liberals are prepared to deploy public humiliation and other tactics to bully the other side into submission. Those on the left are accused of being sensitive “snowflakes” while those on the right angrily demand that the state and society sanction the left for the expression of political views it finds distasteful.

I wrote an article last fall for this paper covering the story of President Trump’s tactics when he demanded NFL team owners fire players who protest police brutality by taking a knee during the national anthem. When my story was published, many wanted to take sides. Not surprisingly, I was in the minority of students who felt that Trump was wrong and that the players had every right to take a knee.

“Civil discourse” was not going to change anyone’s mind: this was about our flag and the American pastime of football and neither side was going to convince the other. And although everyone had opinions about the boundaries of free speech and whether they agreed with Trump calling protesting football players “sons of b*****s,” nobody seemed to be particularly outraged by the fact that Colin Kaepernick was rendered unemployable by his decision to take a stand against police brutality of minorities.

This brings me back to Rosa Parks and the other civil rights activists. Back then, whether you agreed with the side on the left or the side on the right, the clashes were about things of great consequence. Hearing about high schoolers whose feelings are hurt because they feel like their opinions are not being validated sounds to me like a whole lot of nothing.

We are a generation that has grown up with more personal freedoms than any other in history. It is unfortunate that this writer, someone who seemingly has been denied nothing and deprived of nothing, feels persecuted. Maybe such feelings will give him a better appreciation for what minority groups have endured throughout history.