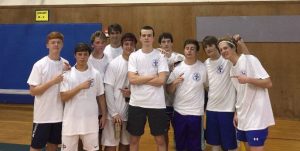 The Pace Academy varsity boys basketball team’s season is well underway, with a 6-3 record as of Dec. 10. For the perhaps less skilled basketball guys, a season of their own has begun: Peachtree Road United Methodist Church (PRUMC) Basketball.

The highly competitive season provides student athletes who do not play varsity basketball for their school to show off their skills in an organized league. The seven Pace teams consist of two senior teams, three junior teams, one sophomore team and one freshman team.

A group of senior boys comprise the Wet Boiz, the PRUMC 2017-18 defending champions who aim to hold their title. Led by dominant playmaker Max Appel, the team struggled early in the regular season last year ending with a record of 2 wins and 5 losses. In the playoffs, however, they turned the intensity up. Appel had the hot hand throughout, averaging 22.4 points per game. Big man Billy Snyder bolstered the paint, nabbing 5.2 rebounds per game.

The Wet Boiz strive to pick up this season right where they left off. “We really cannot slip up this regular season because there are too many skilled teams this year,” said elite mid-range shooter Nate Robinson. “I think we got it in the bag again because we all worked super hard this offseason and have gotten stronger.”

The Stevie Wonder Dogs, the other senior team and the Wet Boiz’ biggest rival, were not too thrilled with the outcome of their season and refuse to take the loss this year. The Dogs are led by Patrick Markwalter, as he uses his strength to drive to the hoop and get his team involved. This season, both Pace senior teams aspire to represent the Pace Class of 2019 and bring home a championship.

For the first time, the Class of 2020 has formed three teams: The Sauces, The Hoteps and The Bluehose. Already the three teams have traded an abundant amount of trash talk and “beef” amongst the players. The Sauces are led by three-point bomber and aggressive defender George Robbins. Robbins is known by his friends as a “water gun,” implying he will not miss a three when given the chance, especially from the corner. “I know there are many teams, however, I think with my leadership we can bring home the first ever Class of 2020 championship,” said Robbins. “I try and involve the entire team and share the ball, but when it comes to the last second I take the responsibility.”

Several players on Hotep were originally on the Sauces, but after a disagreement the players broke off to form their own team. They are a much bigger and taller team compared to the Sauces. However, it appears to many that their passion is substantially less than the Sauces. Jack Robison, known as a wise playmaker, has kept his team in check and brings the winning attitude to their team. He hopes to not only beat the Sauces but to reach his end goal of winning the entire league.

The sophomore team, the East Atlanta Santas, is young but have experience playing together on the court and are two-time defending champions for their grade level. The strong back court of Sam Selig and Sam Webb scares many opponents as these two come down the floor ready to score.

“Our main game plan is to find Selig on the three point line and let him go to work,” said Webb. Selig and “Swebb” are often compared to Warriors guards Steph Curry and Klay Thompson, arguably two of the greatest shooters in NBA history. Although they have won the past two years, this year many of the Pace teams will compete regardless of grade, so the Santas may have trouble defeating the older teams.