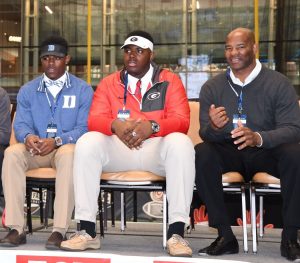 A number of Pace athletes now excel on the college gridiron. Two in particular, Deon Jackson and Andrew Thomas, have made huge strides on the field since they graduated in 2017. “The last couple years have been huge for Pace football, and it has been really cool to send some of my guys to college,” said offensive line coach Kevin Johnson.

Jackson has continued his academic and athletic career at Duke University. After his athletically explosive senior year, many people in the Pace community were excited to see what he could do at Duke alongside former classmates Wendell Carter Jr. and Summer Brown, who committed to play basketball and volleyball at Duke, respectively.

Jackson had a slow freshman year getting adjusted to the size and speed of the college players. However, this start did not deter him from his goals. He put in the work with the football and weight training coaches over the offseason, improving his speed, strength and elusiveness and eventually climbing the ranks of collegiate football.

Jackson has been putting up consistent numbers this year for the Blue Devils. During an important match up versus ACC coastal division rival University of Pittsburgh, Jackson broke free, setting the Duke record for all purpose yards in a game with 403 total yards. Jackson is only the third ACC player to achieve 400 all-purpose yards in a single game.

He carried this momentum into the following week’s game against the University of Miami (Florida). On the opening drive he burst out, making a 75-yard touchdown. These two games earned him the ACC player of the week award.

Jackson kept up his performance in the next game against Duke’s arch rival, the University of North Carolina, setting his new career record for rushing yards in a game. According to 247Sports, Jackson “leads Duke in rushing yards (806) and rushing touchdowns (7) while ranking second in points (54) and fourth in receptions (24). He ranks third in the ACC in all-purpose yards per game (124.6) and topped the conference in league games with 157.4 yards a contest.” Jackson received second team all-ACC honors this season.

Graduating the same year as Jackson is offensive lineman Thomas, who took his career to the University of Georgia. Thomas was a starter at UGA for all 15 games during his freshman year, which was remarkable considering Georgia made it to the national championship that season.

He was impressive from the outset, and was selected to Freshman All-America Teams by ESPN, USA Today and the Football Writers Association of America. “At the college level, all the players will be as big as, if not bigger than you, so it is all about being technically sound, and that was what he did,” said Coach Johnson.

Thomas had a very special start at Georgia thanks to his technically sound playing. “Coach Clement [Rouviere] and the weight staff allowed me to grow in strength, and Coach Kevin [Johnson] and the football staff helped me improve my technique,” said Thomas. “Countless workouts with Kev helped me hone in on my skill and improve my technique which I found out was very important in my position.”

This year, Thomas has continues to contribute, making the shift at the beginning of the season from right tackle to left tackle, and helping Georgia reach an 11-2 record and putting them in contention for the college football playoffs. He started in all games but one, after he had to leave the South Carolina game in the third quarter with an ankle injury and missed the following game against Middle Tennessee State University.

Thomas was selected as one of three game captains in the contests against Vanderbilt, Auburn and Georgia Tech. He also was named the SEC Offensive Line Co-Player of the Week after Georgia’s win against Kentucky.