Letter to the Editor from Senior Andrew Ladden 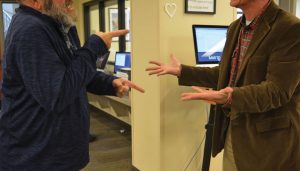 What stands between the world and me? I believe that it is the culture and society in which I have been raised and the clash of opinions between myself and my peers that limit me from speaking my true mind. While I am very appreciative for the fortunate way that I have grown up, the increasing polarization in our world, especially in politics, has had a very negative effect on me in my school community.

Throughout my private high school experience, I have felt as though I am not accepted for my views and beliefs that would otherwise be accepted outside of my specific community.

For instance, after discussing controversial articles in English class one day, three of my closest friends refused to speak to me all day because I simply expressed my opinions with which they disagreed. It was not my intention to offend any of my peers in what is supposed to be a discussion-based class but I nonetheless received the nickname “entitled d*****bag” for stating my beliefs.
I was accused of disrespecting my fellow classmates for expressing my personal view on the Brett Kavanaugh case. My classmates felt insulted that I, despite knowing they felt the opposite, spoke my mind and thus they disregarded both my opinion and feelings entirely. Why should I be silenced simply because I think differently from my peers? I feel locked in a position where I must decide if expressing my beliefs is worth risking my friendships.
In many circumstances, discussions do not consist of right or wrong answers. To me, it feels as if my classmates view my responses as ‘wrong’ just because they differ from their own. Rather than attempting to empathize with my point of view, they view it as a personal attack, which is definitely not my intention.
I simply wish for people to be able to express their own opinions and engage in a civil conversation with others who may disagree with them without experiencing ridicule and hatred for their ideas. This increased polarization of thought and inability to debate cordially threatens the future in politics as well. It seems to me that as our generation takes the reins as future leaders, America will only become more polarized and more radical.
As civil discussion becomes abusive verbal attacks, what is supposed to be the freest country in the world will transform into one of fragility. I am truly concerned for the future our generation will bring to both politics and America. Expressing my views should not be a factor that separates me from the world.