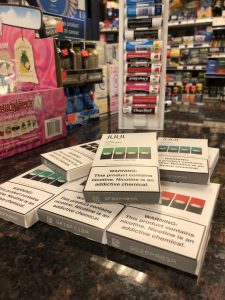 According to public health non-profit Truth Initiative, teens are most likely to purchase Juul pods at retail locations such as gas stations. Photo: Lee Wilson

“Why are there urinals in the Juul lounge?” has become a popular internet turn of phrase highlighting the bathroom vape culture at schools, including Pace.

Since PAX Labs released the Juul on June 1, 2015, it rapidly took over 71% of the e-cigarette market share. Now an independent company, Juul can credit a lot of their success to popularity among teenagers.

Juul‘s eye-popping $16 billion valuation might take a hit now that it’s removing its cucumber, crème brûlée, mango and fruit flavors from brick-and-mortar stores and gas stations. Juul is also shutting down its U.S.-based accounts on Facebook and Instagram.

These changes follow a crackdown by the U.S. Food and Drug Administration (FDA) for the company’s alleged marketing and selling to teenagers. In late September, the FDA paid a surprise visit to the Juul Labs San Francisco headquarters and seized “thousands of pages and documents,” according to CNBC. The FDA investigation was sparked by studies illustrating an increase in teenage vapers from 2.5 million to 3.5 million. The FDA gave Juul 60 days to form anti-teen smoking initiatives, but now that their time is up, the FDA is taking the cause into their own hands.

Juul CEO Kevin Burns gave remarks following the backlash. “Our intent was never to have youth use Juul products,” he said. “But intent is not enough, the numbers are what matter, and the numbers tell us underage use of e-cigarette products is a problem. We must solve it.” Juul will still sell its mint and tobacco flavors in stores and all flavors online, but the FDA hopes that the lack of kid-friendly flavors in stores will deter teen vaping.

Since Juul has the largest market share, it is being used as the scapegoat for a larger and evolving vape industry. Founded in 2013, Suorin partnered with manufacturing giant Foxconn to produce the Suorin Drop and the Suorin Air, stronger alternatives to the Juul.

Suorin users often started on the Juul and used it until their nicotine fix wasn’t satisfied by the 40mg or 5% nicotine content of Juul pods. Suorins are cheaper, and they offer juice with 50mg of nicotine and up to 80% vegetable glycerin content, providing stronger and more “satisfying” hits.

Of the 177 upper school students responding to a recent Knightly News survey, 30.5 percent reported having used a Juul or Suorin on campus in the past 30 days. A whopping 73.9 percent of respondents report knowing someone who used a vaping device on campus in the past 30 days. “At this point, I’m almost surprised when I go to the bathroom between classes and there isn’t someone in there ripping the Juul,” said an anonymous student.

At a certain point, we must put some of the blame not on Juul Labs but on ourselves. This new wave of e-cigarette advertising uses the same tricks that Big Tobacco used 40 years ago, yet we are falling for them again.

A common myth is that there is no proof that vaping is harmful. While vaping is too new of a concept for scientists to know as many health risks as they know for cigarettes, studies already show dangerous effects. A paper from the American Heart Association reported that chemicals in several common vape flavors killed endothelial cells. When harmed, these cells that line blood vessels can have adverse effects on cardiovascular health. This is an early study out of many to come examining the dangers of vaping.

Vaping also primes the teen brain for addiction. According to the CDC, all Juul cigarettes have a high level of nicotine, with a single Juul pod containing “as much nicotine as a pack of 20 regular cigarettes.” The CDC asserts that “nicotine is highly addictive and can harm adolescent brain development,” including harming “the parts of the brain that control attention, learning, mood, and impulse control.” The brain continues to develop until around the age of 25.

Numerous sources state that growing up with a nicotine addiction increases the odds of smoking cigarettes in the future, and abuse of alcohol and other drugs is more likely as well.

Even with FDA regulations, intensive studies into the harms of vaping, and an intellectual anti-substance culture like the one at Pace, it’s still likely vaping will continue in the Inman bathrooms, locker rooms and upper school bathrooms.