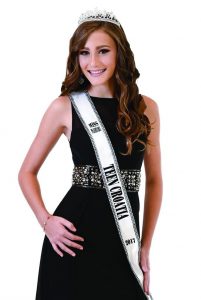 Govic was born in New Jersey, and thereafter moved to New York, Florida and most recently Georgia. “Georgia is definitely different than the other places I have lived but I like it a lot better here,” said Govic.

New to the Pace community this school year, Govic has already jumped into clubs and sports that Pace offers. Govic is a supportive team member of the JV cheerleading squad and loves science. “I may do track this spring, and next year I might do one of the musicals,” said Govic.

Although a seemingly ordinary Pace student, Govic leads an extraordinary double life chasing her dreams. At 13 years old, she was crowned Miss Teen Infinity International 2018. The pageant’s website states that it focuses “on bringing awareness to global issues and causes, as well as promoting charitability among today’s women and teens.” As a part of the pageant, contestants must raise money for a cause they select and about which they feel passionately.

“Ever since I was younger, I had always done work for child hunger, volunteering at food banks and such,” said Govic. “When the time came to choose a platform for the pageant, I just knew I had to do something for child hunger.” She raised thousands of dollars via GoFundMe pages and social media accounts.

Govic’s main love is singing, and she hopes to follow her musical path wherever it leads her. She has recorded 10 songs, available on iTunes and Spotify, and has also filmed five official music videos. Her most recent music video for the song “Out My Mind” was released on Nov. 18 and has over 320 thousand views on YouTube.

Govic is a young artist inspired by several influential female vocalists. She was inspired to write most of her own music, and gets help from a production company in Los Angeles. “Demi Lovato is definitely my favorite artist, and I think Ariana Grande has amazing vocals,” said Govic.

In pursuit of her talent, Govic has amassed a large Instagram following through her account @marissagovic. While she loves the support, she notices the difficulty that comes with publicity. “It’s hard dealing with what people have to say,” said Govic. “There are obviously positive comments, but there’s also negative ones.”

In her rare free time, Govic enjoys traveling to Europe. “My favorite country is probably France because I love their culture, and the food there is pretty great,” said Govic. “Since I have family in Croatia, it’s fun to go there, too.” She also loves to dance and play the piano.