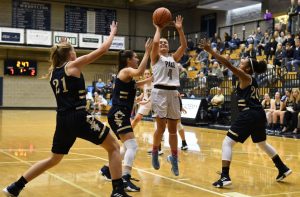 Senior Madeline Janki pulls up for a shot against St. Pius on Dec. 1 in a game that Pace won 53-23. Photo: Fred Assaf

With an overall record last year of 16-9 and a second place ranking in region play, the varsity girls basketball team has high hopes for this year. With a record of 6-4 as of Dec. 10, the team has already defeated three of their region opponents, Redan High School, Towers High School and Cedar Grove.

The driving force behind the team this year is the group of determined and hard-working seniors, including Paige Fleming, Madeline Janki, Ann Rafeedie, Kayla Ross and Joelle Zelony. These five girls have stepped up to provide leadership in their final season together. “We have been together for all of these years, so we have also gotten better as one,” said Fleming. “We are all pretty good friends, and we work well together leading the team on and off the court.”

“The seniors all bring something different to the table,” said junior Virginia Hobbs, who has enjoyed being teammates with these girls. With the combination of skill sets from the 12th graders, the team is well-prepared for a competitive and long season.

Head coach Troy Baker has gotten to know this group well because they are the first class that he’s had the opportunity to coach for all four years of high school. As the seniors began their high school experience freshman year, Coach Baker also started his journey at Pace. “I feel really close to them and I am going to miss them when they graduate because they are such a special group of girls,” said Coach Baker.

Side by side, the girls and Coach Baker have learned from each other and strengthened the basketball team as a whole. “As a coach, I owe them a lot for everything they have done,” said Coach Baker. “This group here is the group that has really redefined the entire girls basketball program.”

This especially talented group consists of three girls who have committed to universities for athletics. Post player Ross heads to Boston University next year, where she will play soccer. Both point guard Zelony, who has committed to Tufts University, and shooting guard Rafeedie, who recently committed to Denison University, will continue their basketball careers in college.

Last year there were no seniors on the team, but that is not the only difference in the program. The team has also gained two new assistant coaches. John Bishop recently joined the Pace community from Jonesboro High School where he used to work alongside Coach Baker. “Coach Bishop is very analytical and I can tell he knows what he is talking about,” said Fleming. “He also seems to work really well with Coach Baker.” Coach Baker has known Coach Bishop for 15 years and claims that the two share a similar philosophy, which will help to create a strong dynamic for the team.

Assistant coach Kabeya Kabongo is also new to coaching the girls team, having formerly worked with the Pace boys teams exclusively. “He has always expressed interest because he loves our program,” said Coach Baker.

Although there are changes in the team’s leadership, one consistent aspect of the basketball program is the connectivity between the players. “We have always worked to become closer in order to create a confident team,” said Hobbs. With practice every day and games multiple times each week, the group is always together, which allows them to bond.

There are also several tournaments each year where the team spends days and nights together. “I love the trips we take,” said Fleming. “This year we are going to Orlando for our Christmas tournament, which everyone is so excited for.”

Getting to play basketball in a new setting, enjoying meals with one another and spending time on long bus rides benefits the team on and off the court. “These trips really help us to find our place on the team,” said Hobbs.

Although winning is exhilarating, the players and coaches unanimously agree on one common goal: to be the best they can possibly be and to play together as a team. “When we play our last game of the year, we just want everyone to feel like they don’t want it to be over,” said Coach Baker. According to Fleming, the team has definitely gained more respect over the past few years. “We want to keep that going after we leave Pace, leaving a good mark on the program,” said Fleming.