Although Flawed, Trump Has Delivered on Some Promises 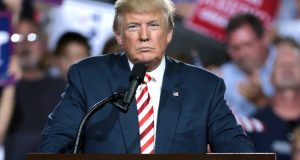 President Trump is taking a lot of heat, but the country continues to improve. Photo: Wikipedia

From the beginning of his campaign, then-candidate Donald Trump was surrounded by controversy over sexual misconduct, an alleged cozy relationship with Russian President Vladimir Putin and many other questionable dealings. Now, two years into his presidency, these criticisms are still relevant and continue to grow.

Given the controversy surrounding President Trump, some have suggested that I am taking a risk by even writing on this topic. Overall, Trump is not a great person, and he does not have the morals to be the leader of the free world. He consistently tweets, says and does many things that are unacceptable for a person in his position. However, if you look beyond the controversy, you can see that President Trump is, in many ways, helping more than many are led to think.

In order to fully understand Trump’s presidency, one must first understand the country and the world around it. Trump is the first president to be elected in an era where the media, especially large media outlets like CNN and Fox News, basically create the White House narrative. News organizations have effectively become platforms for entertainment instead of the news.

For example, CNN allows huge talk show hosts such as Anderson Cooper and Don Lemon to broadcast their extremely negative opinions of Trump to wide audiences on air. FOX News counters with Sean Hannity and Laura Ingraham. They use their own persuasive words to adversely or positively illustrate the President’s actions, speeches or tweets.

Both Lemon and Cooper are very good at their jobs, and with a combined viewership of over two million people nightly, they are able to sway public opinion. Left leaning networks like CNN will convince you that Trump is the devil by focusing on his tweets and controversial statements. These sources, however, do not give much insight into Trump’s actual policies and the successful implementation of his campaign promises.

Meanwhile, right leaning outlets like FOX News focus on legislative and economic wins while ignoring his missteps and effectively sanctify him. However, the truth lies somewhere in the middle.

Even though news outlets control the narrative, as many more people watch the news than a White House press conference, it’s up to individuals to be discriminating consumers of news in order to arrive at their own conclusions. However, I do not think the main issue is the opinions of these outlets but the subjects covered during shows like the ones previously mentioned.

These news anchors will spend much of the time talking about Trump’s tweets, speeches or approval rating and how low they perceive it to be. But his approval rating in June 2018 was 45%, which was the same as President Obama’s at the same point in his first term.

Another thing that major media outlets seem to leave out, or at least barely touch on, is the job market. Unemployment is at the lowest it has been in decades, at 3.7%, and is down over 1% since Trump took office. In contrast, at this point in Obama’s term, the unemployment rate was at 9.9%. Although Obama did have the recession to deal with, and he did an excellent job helping the country recover from that, it is clear that Trump has not been detrimental to the job market.

Lastly, before the stock market dropped as a result of the interest rate hike, it was the highest it had been since the recession in 2008. Trump has delivered on many campaign promises, including cutting taxes, reducing regulation and signing the new NAFTA trade deal. But many of his successes are overshadowed in the media by stories about his tweets or other drama in order to attract the viewers’ attention or boost ratings.