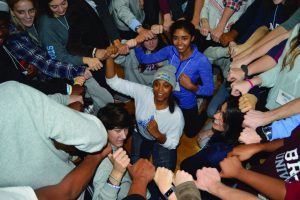 “Homelessness is a situation, not a character trait,” said Regina Jennings, Director of Support Services at Covenant House of Georgia, in an effort to squash a common misconception. The Covenant House provides housing, medical services and meals for homeless and trafficked youth.

The Covenant House has been instrumental in addressing these devastating statistics. According to their website, the charitable organization has served more than 1000 individual youths this year. Out of those individuals, 30 percent have been sexually exploited, 32 percent were in the foster care system, 54 percent have a history with the criminal justice system, 100 percent receive individualized case management and more than 640 have received full medical exams. “I was aware of youth homelessness in Atlanta, however; I never fathomed it would be at this magnitude and I’m sure many people are still unaware,” said senior Jack Ferguson.

Several full-time employees, serving as guides during the visit, were effective in creating an environment that demonstrated the challenges of youth homelessness. They pointed out that sleeping outside is not an effort to mimic real homelessness, but to aid in the formation of empathy for and understanding of homeless youth.

Pace participants were asked to identify what made them feel safe. Many listed that they felt secure because they had a home, a loving family and supportive friends. The instructors then directed the participants to cross off items on the list, illustrating that the empty lists more accurately represent a homeless youth’s support system.

After the activity, three young people talked to Pace about their individual journeys. One was kicked out of her home at the age of 18, one moved to Atlanta alone after black mold was found in his home and one was incarcerated and pregnant by the age of 20. According to the speakers, homelessness is equivalent to a pit. Once you fall down, the only direction from there is up.

Although they continue to struggle, the three residents have made great improvements in their lives. One is now attending college, another is moving into her first apartment, and the third has a job and is receiving help she had previously rejected. “Each one was articulate and inspirational, answering strangers’ questions with little hesitation and fear,” said senior Ania Briscoe. “They were prime examples of how homelessness can have harsh effects on the undeserving.”

Once discussion concluded, Pace participated in an activity Covenant House residents often do, attempting to repair their brain previously stunted from trauma. “I never realized that when someone experiences trauma their brain stops developing after that point,” said junior Sophie Lettes. “I can’t even imagine how difficult it would be to regain some of that brain activity.” The activity required stamina and concentration, mimicking the premise of the childhood game “Simon Says.”

The final excursion before going to sleep was a tour of the homeless presence in Atlanta. Many homeless youth spend their days on the trains, waiting until they stop at night. After getting off at a random location, they often seek out abandoned houses. The Covenant House has outreach programs for these individuals living on the streets and in these “abandos.”

Going out up to five times a week, Covenant House employees approach people on the streets, reporting that on average it takes five confrontations before an individual seeks help. The Covenant House provides homeless youth with three options. They can either utilize their community service center which provides medical and hygiene services, their crisis shelter which allows them to stay up to 90 days or their Rights of Passage program which is a two year program for working youth or students.

The experience concluded with an outdoor sleepover. In 50-degree weather, Pace participants slept on cardboard boxes and in sleeping bags for the duration of the rainy night. This portion of the event was a time for reflection.

“The sleep out is one of my favorite Pace events,” said Ms. Lattouf. “It brings together students and teachers who may not know one another well and provides a framework for them to have a long-lasting connection. Furthermore, through the sleep out we are able to better understand and therefore empathize with those facing issues associated with homelessness and housing. It is a true community engagement event where we are able to come together around important issues within our city.”

Most members of the Pace community find it nearly impossible to fully grasp the hardships of youth homelessness. However, being educated on the subject and raising awareness is not. To learn more about the Covenant House of Georgia’s mission, visit http://www.covenanthousega.org.