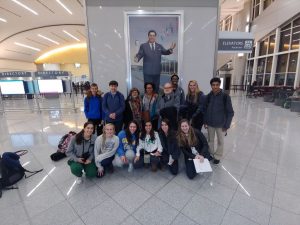 While most were spending time with family and friends over Thanksgiving break, 11 Pace students and three teachers travelled to Budapest, Hungary for the Yale Model Government Europe Budapest 2018 conference. There, they participated in several mock EU councils and European cabinets, as well as seeing sights from Budapest’s numerous occupancies and learning the city’s history.

“I really enjoyed the Hospital in the Rock, where I got my gas mask,” said Blake Rodriguez, the only senior on the trip. From visiting several of places of worship, to exploring Budapest with many different tour guides, to making dinner at the Butterfly Home Danube, the group’s first week in the city was packed with events and special moments.

While spending a week sightseeing was an incredible experience, the real reason for the trip began on Thanksgiving, November 22. Following an unusual Thanksgiving dinner filled with cucumber salad, steaks (and chicken paprikash), and white chocolate cake, students filled conference rooms in the Marriott Budapest to begin discussing topics ranging from human trafficking to Catalonian independence to organized crime.

“I really enjoyed meeting new people from several different countries, as well as getting to see how well spoken they were,” said sophomore Eve Kogon. After three hours of discussing and passing resolutions, committee stopped and this year’s crisis was announced. Students were faced with an illness that had already begun to spread throughout Eastern Europe. Their challenge was to stop it from spreading and find a cure. However, they only had a few hours to prepare and find possible solutions to this epidemic.

The next day, students spent hours and several committee sessions working in councils, made up of a dozen EU representatives. Each council used their powers and jurisdiction to tackle the crisis. As they worked, they had to deal with legislation and measures that other councils were passing, some quite similar to the ones their council was working on.

Mixed in with moderated caucuses were videos from the crisis staff and Yale students running the conference, as well as readings from the official Twitter account for the conference. “The varying rumors, the multiple sources of information, the false leads – all are so true of any crisis situation,” said history teacher and chaperone Helen Smith. “The manipulation of the truth is always a danger by those who hope to gain from the disorder and panic.”

After a delegate dance that lasted until midnight on Nov. 23, delegates were surprisingly awake and ready to debate on Saturday morning, the last day of the conference. After a couple more hours of working to solve the crisis, several cures were found and the epidemic was stopped. “I truly enjoyed collaborating with the Hungarian Minister of Immigration and Refugees to work against Iran and solving the refugee crisis,” said Rodriguez.

However, the committee sessions could not close without some antics, encouraged by Yale students. For example, the cabinets of France, Spain and Germany formed one unified “Gerfrancespain,” which was promptly invaded by the UK and Sweden (who were just as quickly expelled from the massive country).

In the end, sophomores Maggie Jenkins and Dylan Kaminski, as well as junior Andrew Neville, all received honorable mentions for their work in their respective councils, and possibly for Kaminski’s participation in spreading a rumor on the source of the epidemic that sent the entire conference into a frenzy.