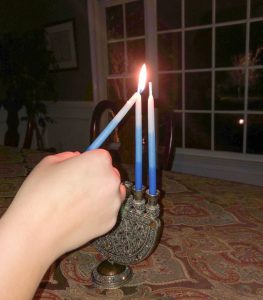 During the eight days of Hanukkah, Jewish families observe the tradition of lighting the menorah. Photo: Jamie Kornheiser

The rich history behind Hanukkah is unknown by many, although it’s widely celebrated by Pace students who are Jewish. The holiday, with over five spellings including Chanukah, Hannukah and Hannukkah, marks a time that is about a lot more than gift-giving.

Hanukkah, also known as the Festival of Lights, commemorates the rededication of the temple in Jerusalem after it was desecrated by the soldiers of Syrian Antiochus Epiphanes in 168 BCE. Antiochus abolished Judaism, and altars and idols were set up in the temple for the worship of Greek gods, with Jews pressured to convert or risk death.

The Maccabees, led by Judah (son of Jewish priest Mattathias), defeated the Syrian-Greek army despite their small numbers and long odds, around 166 BCE. Following the victory, Judah and his followers rebuilt the altar of the Second Temple that had been defiled by the Greeks and lit the lantern called the eternal light. Although they were only able to find enough oil to last for a single night, the oil lasted for eight days.

Today, Jewish families celebrate this miracle by lighting a menorah at Hanukkah, a candelabra holding nine candles. Eight candles symbolize the eight days that the lantern in the Temple remained lit, with a ninth candle serving as the shamash, or helper candle, used to light the others.

Hanukkah begins this year at sundown on Sunday, Dec. 2 and ends on Monday, Dec. 10. Beyond lighting the menorah each evening, key traditions include playing games like dreidel, gift giving and making traditional oil-based foods such as sufganiyot, or jelly-filled doughnuts and latkes, or potato pancakes.

Pace students love Hanukkah for a variety of reasons. For sophomore Eve Kogon, Hanukkah is a time for family. “Hanukkah is about a lot more than presents,” said Kogon. “We don’t really do that in my family.” Instead, the Kogon family hosts around 60 people. “It’s kind of crazy around the house,” said Kogon. “My entire extended family comes over and we make traditional foods. It is the one time of year we all get to come together.”

Sophomore Marc Rosenthal loves Hanukkah because of its traditional aspects. “I love that it repeats every year and how our ancestors have done the tradition of lighting the candles every year for a really long time,” said Rosenthal. “It makes me feel connected to the Jewish community.”

Both Kogon and Rosenthal said that Hanukkah is a very popularized holiday. Rosenthal believes it has evolved into a “Jewish Christmas.” Kogon agreed: “Most Jews do celebrate Hanukkah because it’s around the time of Christmas,” said Kogon. Kogon added that it is a less religious holiday, as people don’t often attend synagogue on Hanukkah as they do on other, high holidays.

For senior Kayla Ross, Hanukkah is about family and gift-giving combined. “My favorite Hanukkah tradition is that in my family, each family member ‘sponsors’ a different night of gift giving,” said Ross. “Each night, my siblings, parents and I take turns giving the gifts we got for everyone else to each other.”

Junior Nikki Rubin and freshman Gabriel Kadoori enjoy Hanukkah because of its message of perseverance. “The story of Hanukkah for me is really about being positive when the odds are against you,” said Rubin.

Kadoori’s favorite tradition is lighting the candles every night, but the celebration is special to him for a different reason: “The story of Hanukkah is yet another case in history in which Jews have been both targeted and the underdogs, but remained persistent and survived,” said Kadoori. “It is important that we celebrate the willpower and determination that the Jews have always had and must keep, going forward, in order to survive.”