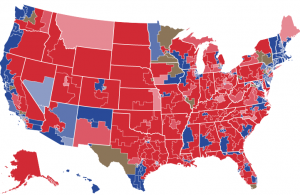 The country’s midterm elections on Nov. 6 proved to be unprecedented in many respects. First, voter turnout represented the highest raw vote total for a non-presidential election in U.S. history. Second, by the end of election night, there remained uncertainty in more than a dozen nationwide races, with 11 House races still too close to call, two Senate races (Florida and Arizona) still undecided and a third Senate race (Mississippi) headed for a run-off.

As for Georgia, people who went to sleep on election night expecting to learn the identity of their new Governor in the morning, woke up without a clear cut winner. That morning, Brian Kemp led Stacey Abrams by 65,145 votes (50.3 percent) but military ballots, absentee ballots and provisional ballots (paper ballots given to people whose eligibility to vote is unclear and must be resolved before those votes are counted) were still outstanding. In Georgia, if no candidate secures more than 50 percent of the vote, there is a mandatory run-off.

Abrams has refused to concede, maintaining that she is “in this race until [she and her team] are convinced that every vote is counted.” Abrams later filed a lawsuit seeking to block counties from discarding certain absentee and provisional ballots. Kemp, on the other hand, declared victory in the race and began announcing his transition team in a press conference Thursday morning.

Although Kemp’s lead has narrowed since last Tuesday, he asserts that there are not enough outstanding ballots to force a recount – even if all of them were in Abrams favor. In the meantime, the Associated Press has not declared a winner.

Florida has had its share of murkiness as well, as accusations about voting mechanics, particularly in Broward county, have cast some doubt on the certainty of Republican challenger Rick Scott’s razor-thin margin over incumbent Senator Bill Nelson. On Saturday, Florida’s secretary of state ordered a recount of three statewide races after problems with the ballots were uncovered. (Florida law requires a recount if the margin is less than 0.5 percent).

Unlike Stacey Abrams, Florida gubernatorial candidate Andrew Gillum conceded to Representative Ron DeSantis Tuesday night (when the vote tallies showed that he had lost by over 36,000 votes), only to withdraw that concession over the weekend after a recount was ordered in the now too-close-to-call race.

Still, there is much to report about the midterm election trends. According to strategists in both parties, when all of the votes are finally counted, Democrats appear poised to pick up between 35 to 40 seats in the Congressional House. That represents the biggest Democratic gain in the House since the 1974 election after the Richard Nixon Watergate scandal.

On the Senate front, Republicans gained one seat and retained their pre-election majority with a tally of 51 seats to the Democrats’ 47. But with just two races left to be decided in Florida and Mississippi, they will not reach the 54 Republican Senate seats projected on election night.

Beyond the number of victories and upsets, the 2018 election was noteworthy for the way in which it deepened many of our nation’s divisions, and also shifted the battleground and altered the political landscape across the country. Democrats have cause to be optimistic in California, Arizona, New Mexico and Texas.

In Arizona, Sinema won her U.S. Senate race by a 1.7% margin. In neighboring Colorado, Democrats won every statewide race, picked up a House seat and took control of the state Senate.

In Nevada, Democrats picked up a Senate seat and the governorship. In Texas, while Democratic Senate nominee Beto O’Rourke lost the race to incumbent Ted Cruz, he still managed to win 48 percent of the vote and Democrats picked up two suburban congressional districts.

On the other hand, Ohio continued to move in the direction of the Republicans winning the open gubernatorial race on Tuesday, though Democrat Senator Sherrod Brown managed to hold onto his seat. Democrats also failed to win the governor’s race in Iowa (although they gained two House seats) and also failed to make inroads in the traditional Republican states of Kentucky, North Carolina and Nebraska.

From the perspective of Georgia, Tuesday’s results reveal a deeply divided state with (using Kemp’s numbers) only 60,000 votes out of the four million votes cast in Georgia separating Republican Brian Kemp from Stacey Abrams. Beyond the McBath win, the GOP has reason to be nervous about the northern suburbs of Atlanta, where, according to the Atlanta Journal and Constitution, Republican Governor Nathan Deal easily cruised to victory just four years ago. Four years later, counties like Cobb and Gwinnett followed the trend of Fulton and DeKalb counties in voting Democratic – a factor that cannot be overlooked in the election of 2020.